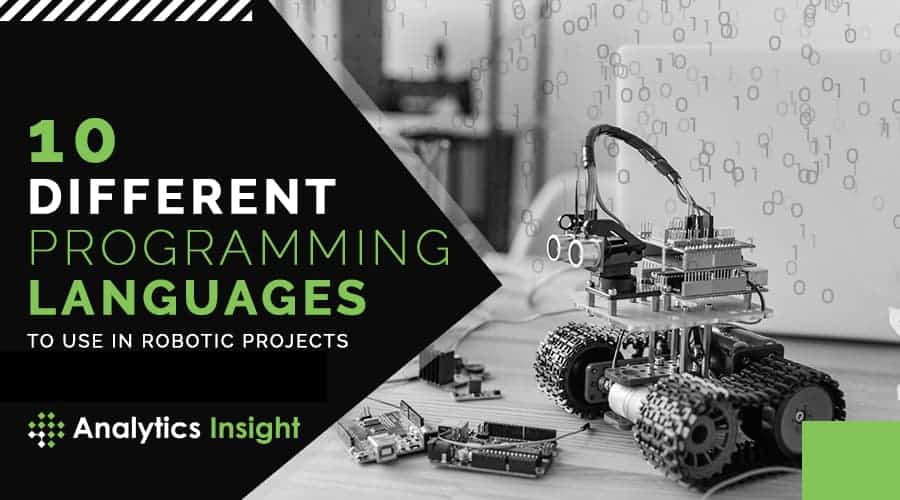 With the help of robotics, human efforts to perform complex tasks have become easier and more precise. Robotics is extremely fun to stream and equally interesting to learn. An aspiring robotics professional must be highly passionate to learn and be actively involved in various problem-solving environments with robust skills in presentation, research, communication, and detailed knowledge of programming languages, as well as physical engineering. Learning programming languages will help professionals execute different robotic projects through easy-to-use interfaces. In this article, we have listed the top 10 programming languages that can be used to build robotic projects.

C and C++: C and C++ make the top of the list because of their abundant tools, libraries, and functions. Several robotic engineers use these languages because they allow easy interaction with low-level hardware. When the robot is severely limited in memory, then the standard C is preferred to save every possible byte. And C++ is used to call the OS API directly, without using multiple platform-specific libraries.

Python: Python is a high-level programming language that plays a crucial role in building and testing robots. It is a good platform to automate, teach, and post-process robotic programs. Many engineers choose this language as it simplifies writing scripts that calculate, record, and simulate an entire robot program instead of manually teaching every statement to the robot.

MATLAB: MATLAB is a high-performing language for technical computing that integrates computation, visualization, and programming in a simple environment, where complex problems and solutions are usually expressed in familiar mathematical notation. Modeling and simulation in MATLAB are easy and can help eliminate implementation errors by identifying problems during prototyping instead of the production phase.

Java: To enable robots to perform human-like tasks, Java language can be used as it offers a wide-ranging array of APIs that are tailor-made to the needs of the robotics space. Command-control recognizers, dictation systems, and speech synthesizers can be built using the Java Speech API. This language contains all the high-level features needed in the robotics industry, especially when it comes to AI. After implementing Java, engineers can create highly efficient algorithms for machine learning, search and neural algorithms, NLP, and other domains.

Microsoft C#/.NET: C# is a proprietory language provided by Microsoft and is largely used in the Microsoft Robotics Developer Studio. It is considered a must-learn language for programmers as it gives them a solid foundation and allows them to branch out into other different fields. C# is primarily used to create visual applications, including a variety of robotic tools that simplify the use of other RPA languages like Python, C++, and Java.

Scratch: Robotic engineers extensively use Scratch for carrying out various automation and robotic projects. It is a visual programming language built for new programmers. It is mostly taught in schools, in technology classes, and robotic clubs, where children interested in robotics use it to build their own machines.

Lisp: Lisp is one of the earliest programming languages. It was originally developed for the applied mathematical notation that is implemented in computer programs. Many crucial sections of the robot operating system are written in Lisp as it is a crucial language in AI. Additionally, it also provides extra features like tree data structures, automatic storage management, dynamic typing, conditionals, recursion, and many more.

Hardware Description Languages: This language is used to program electronic and digital logic circuits. DHL is used to specify the gates and chips and simulate the behavior of the resulting chip specifications through a hardware simulator. It provides facilities like object orientation and garbage simulation in simple ways as compared to other complex orientations and semantics.

Industrial Robot Languages: Almost every robot manufacturer has developed its own proprietary robot programming language, which has been a constant problem for robotic engineers in the industry. A developer can become familiar with any of the widely used programming languages in the industry, but will still have to learn the ones that are specifically used by the company. Recently, ROS Industrial is widely used by manufacturers for offline programming and has become a more standardized option for programmers.