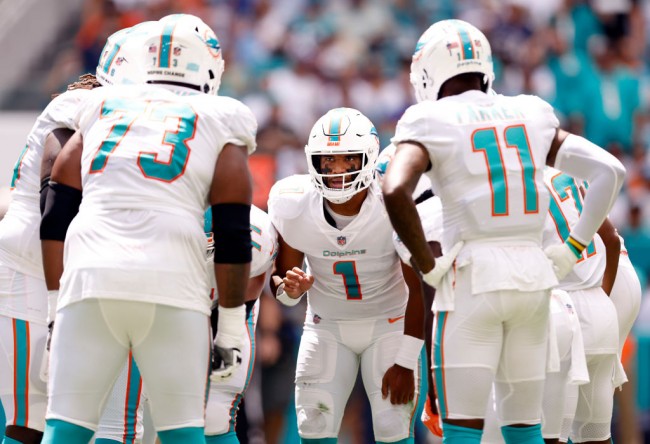 MIAMI GARDENS, FLORIDA – Quarterback Tua Tagovailoa (#1) of the Miami Dolphins calls out a play in huddle against the Buffalo Bills in the first half of the game at the Hard Rock Stadium on September 19, 2021 in Miami Gardens, Florida. (Photo : Michael Reaves/Getty Images)

A losing skid will end this Sunday as the Miami Dolphins and the Jacksonville Jaguars square off across the pond in London in a battle of struggling teams. Here’s our preview of the Dolphins vs Jaguars matchup to see who has the advantage in this AFC clash.

Miami’s losing woes show no sign of ending as the Dolphins absorbed their fourth consecutive defeat on Sunday against the Tampa Bay Buccaneers. The Dolphins had no answer for seven-time Super Bowl champion Tom Brady, who completed 30 of 41 passes for 411 yards and five touchdowns.

The good news for Miami is that quarterback Tua Tagovailoa is set to make his much-anticipated return to the starting lineup for Sunday’s game against the Jaguars. After fracturing his ribs in the Week 2 loss to the Buffalo Bills, he was placed on injured reserve.

Tagovailoa’s return is timely as backup quarterback Jacoby Brissett injured his hamstring in the loss to the Bucs. The Dolphins struggled without Tagovailoa, losing each of their last three games with Brissett under center. Miami’s only victory this season came in Week 1, with Tagovailoa leading the Dolphins to a 17-16 road victory over the New England Patriots.

The former Alabama standout threw for 202 yards with a touchdown and an interception in the win against the Pats, his lone complete game for the Fins this season. Tagovailoa made nine starts for Miami in his rookie season, completing 186 of 290 passes for 1,814 yards and recording 11 touchdowns with five interceptions.

The search continues for Urban Meyer and Trevor Lawrence’s first victory in the NFL after the Jacksonville Jaguars absorbed a 37-19 loss to the Tennessee Titans. Derrick Henry ran riot against the Jags’ defense, recording 130 yards rushing and three touchdowns to hand Jacksonville its 20th consecutive defeat.

With that defeat, the Jaguars made history for the wrong reasons, as they now own the second-longest skid in league history. They are now just six losses shy of the record the Tampa Bay Buccaneers posted in 1977 over their first two seasons as an expansion team.

It won’t get any easier for the embattled Jags in Week 6 as they will next face the Miami Dolphins. The Jaguars have struggled against the Dolphins lately, losing four of their last six games, including a 31-13 defeat in their previous meeting last season.

For the Jaguars to notch their first win of the season in Week 6, they will need to continue their solid play on the offensive end. The Jaguars racked up 454 total yards against a porous Tennessee defense. Trevor Lawrence and co. will be looking forward to facing a Dolphins side that allowed 558 total yards in their loss to Tampa Bay.

AI has the Potential to Make a Big Difference