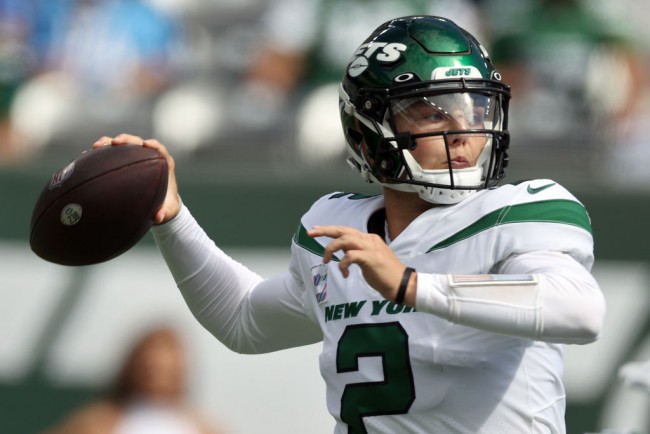 EAST RUTHERFORD, NEW JERSEY – Zach Wilson of the New York Jets looks to throw the ball during the first quarter against the Tennessee Titans at the MetLife Stadium on October 03, 2021 in East Rutherford, New Jersey. (Photo : Al Bello/Getty Images)

Robert Saleh finally notched his first win as New York Jets head coach in Week 4 thanks to the heroics of rookie quarterback Zach Wilson against the Titans. Can Saleh make it two wins in a row this coming Sunday when the Jets face the Atlanta Falcons across the pond in London? Read our preview for a breakdown of this Jets vs Falcons game.

The New York Jets finally recorded their first win of the 2021 NFL season with a thrilling 27-24 overtime victory over the Tennessee Titans on Sunday. It was a morale-boosting victory for the Jets, who suffered humiliating defeats to New England and Denver in their previous two games.

New York’s win would not be possible without the heroics of Zach Wilson. The rookie quarterback completed 21 of 34 passes for 297 yards with two touchdowns and one interception in the win against the Titans. Corey Davis and Jamison Crowder benefited from Wilson’s outstanding display, scoring a touchdown apiece in the narrow victory.

The Jets’ defense also starred in the win against the Titans, holding Tennessee to just 9 points through the first three quarters and only 24 points the entire game. On Sunday, the Jets made Ryan Tannehill’s life a living hell, sacking the Titans quarterback seven times.

Quinnen and Quincy Williams made history in the victory against the Titans as they became the first brothers to record sacks in the same game as teammates since sacks became an official NFL stat in 1982.

Atlanta’s bid to reach .500 for the first time this season ended in disappointment as the Falcons absorbed a gut-wrenching 34-30 loss to the Washington Football Team in Week 4. The Falcons had an excellent opportunity to record their second straight victory, but several missed chances on the defensive end denied them a 2-2 slate.

Taylor Heinicke crushed Atlanta fans’ hearts, throwing two improvised touchdown passes in the final 3:52 to turn an eight-point deficit into a four-point victory for Washington in the end. Heinicke’s late heroics took the shine away from the star performance of Cordarelle Patterson, who became the first Falcons player since 2018 to score three touchdowns in a contest.

Matt Ryan heaves it to Cordarrelle Patterson for the house call ☎️

The Falcons will look to get their season back on track across the pond when they face the New York Jets at Tottenham Hotspur Stadium. It definitely won’t be easy as the Jets have fared extremely well in NFL games played in countries other than the United States. The Jets are 3-1 when playing overseas, including a perfect 2-0 record in the regular season.