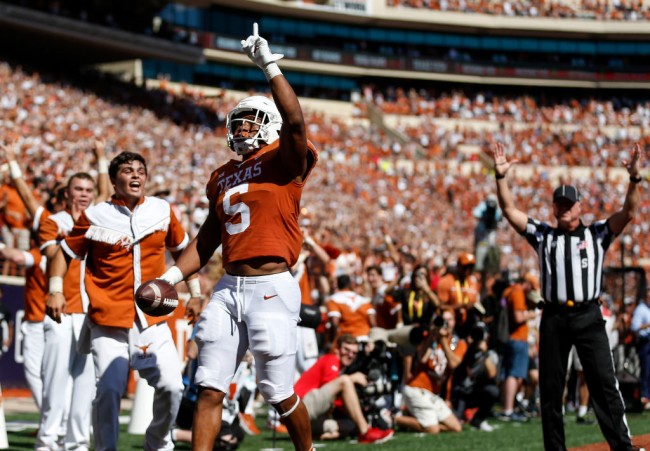 AUSTIN, TEXAS – Bijan Robinson (#5) of the Texas Longhorns reacts after a touchdown in the first quarter against the Texas Tech Red Raiders at the Darrell K Royal-Texas Memorial Stadium on September 25, 2021 in Austin, Texas. (Photo : Tim Warner/Getty Images)

One of college football’s biggest rivalries is finally upon us, with Oklahoma and Texas squaring off this coming Saturday for the 117th edition of the Red River Showdown. Expect a gripping clash between the Sooners and the Longhorns, with both teams nationally ranked and the top spot in the Big 12 on the line in this game. Here’s an in-depth breakdown of this Oklahoma vs Texas matchup.

The Oklahoma Sooners will head to their Big 12 showdown with Texas with momentum on their side after beating the Kansas State Wildcats, 37-31, in Week 5. It was another gritty victory by the Sooners, who improved their season record to 5-0. They have won their last three games by an average of just 5.3 points.

The key to Oklahoma’s perfect start has been its red-hot offense. The Sooners are averaging 38.4 points per game this season, 15th in the entire FBS. Like in their opening four victories, Spencer Rattler took center stage for the Sooners against the Wildcats. He completed 22 of 25 passes for 243 yards with two touchdowns and one interception.

Texas extended its winning streak to three games with a thrilling 32-27 victory over TCU on Saturday. Bijan Robinson starred for the Longhorns in the Week 5 win, rushing for a career-high 216 yards on 35 carries. He scored two go-ahead touchdowns and converted key late first downs in the final quarter that sealed the win for Texas.

On the biggest play of the season Bijan Robinson gets over the 200 yard mark and converts the 3rd & 6 for the dagger.

Special performance by Bijan on the road in Fort Worth #HookEm pic.twitter.com/DXXLq9Eh0W

Robinson has been unstoppable on the ground to start the season, averaging 130.4 rushing yards per game, which is second-best in the nation. He had scored nine touchdowns thus far this campaign, seven of which had come via the run and two through the air.

However, he will have his work cut out for him against the Sooners, who possess the league’s top-ranked rushing defense. Oklahoma had allowed an average of just 79.4 rushing yards per game this season.

The Longhorns had flourished since installing Casey Thompson as their starting quarterback in Week 3. He completed 12 of 22 passes for 142 yards with a touchdown and an interception in the win against the Horned Frogs. Thompson’s patience has finally been rewarded, getting the starting QB position after spending the past three seasons as Sam Ehlinger’s backup.

Oklahoma wins and covers the spread.

How CoinSwitch Kuber Can Overtake Other Crypto Exchanges in India?