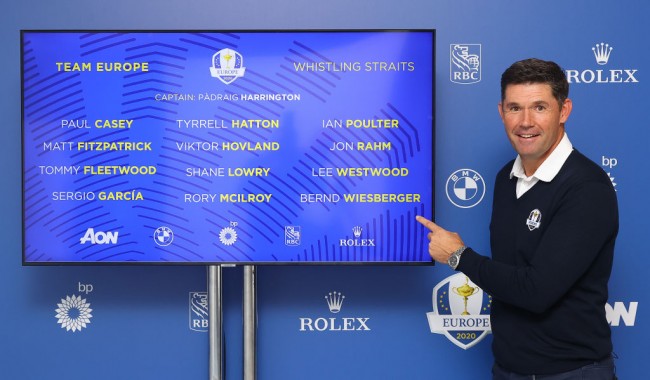 The cast is finally complete for Team Europe, with captain Padraig Harrington selecting Sergio Garcia, Shane Lowry, and Ian Poulter as his three picks for the 2021 Ryder Cup, which will take place at Whistling Straits in Wisconsin in just a couple of weeks.

Harrington’s selection of Garcia and Poulter was a foregone conclusion given the duo’s unprecedented success for Team Europe in the Ryder Cup. Their experience in this competition cannot be matched with Garcia and Poulter combining for a total of 15 previous Ryder Cup appearances between them.

Equally impressive are the points they have collected during their previous stints, with Garcia and Poulter hauling in 40 ½ points for Team Europe in the Ryder Cup. The bulk of those points have come from Garcia, who will be looking to extend his record as Team Europe’s all-time leading points scorer at Whistling Straits, where he will be making his tenth Ryder Cup appearance.

The Spaniard made his Ryder Cup debut back in 1999 and has been a constant presence for Team Europe ever since, only missing the 2010 edition during that span. He was instrumental in Europe regaining the trophy at Le Golf National in Paris in 2018, scoring three points in that event to boost his remarkable career tally to 25 ½ points, surpassing Sir Nick Faldo’s previous European record of 25 points.

Garcia was delighted with his latest Ryder Cup selection, saying, “It feels amazing. Obviously it’s been a good year and I think a lot of solid play on my part.”

Poulter and Lowry complete the cast

Ian Poulter, who will be making his seventh Ryder Cup appearance this month, also has a formidable record in this event, scoring 15 points overall. He is a major weapon for Europe in the singles format, where he remains undefeated.

Poulter’s experience can be relied upon with the Ryder Cup being played on American soil as he was part of the European teams that captured sensational victories at Oakland Hills in 2004 and Medinah in 2012.

Shane Lowry may be a Ryder Cup rookie, but his career accomplishments make him one of the key players for captain Padraig Harrington. He is no stranger to the big stage, winning the Open Championship at Royal Portrush two years ago. Lowry joins Hovland and Wiesberger as the three rookies in Team Europe, who will be looking to retain the prestigious trophy yet again.