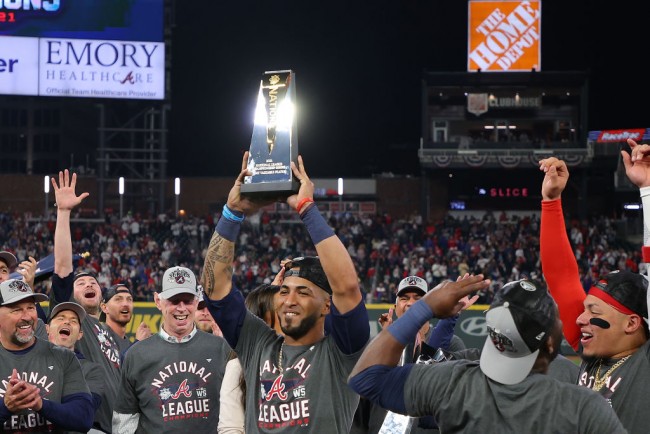 ATLANTA, GEORGIA – Eddie Rosario (#8) of the Atlanta Braves is named the Most Valuable Player of the National League Championship Series after defeating the Los Angeles Dodgers at Truist Park on October 23, 2021 in Atlanta, Georgia. The Braves defeated the Dodgers 4-2 to advance to the 2021 World Series. (Photo : Kevin C. Cox/Getty Images)

The Atlanta Braves are moving on to the 2021 World Series after edging past the Los Angeles Dodgers, 4-2, in Game 6 of the National League Championship Series at Truist Park. It was a historic win for the Braves, who clinched the NL pennant for the first time since 1999. They will next face the Houston Astros in the World Series, which starts October 26 at Minute Maid Park.

The pressure was mounting on the Braves, who found themselves in the same position in last year’s NLCS. Atlanta held leads of 2-0 and 3-1 in the 2020 NLCS before losing the final three games against the Los Angeles Dodgers to miss out on a World Series berth. The first five games of this year’s NLCS followed the same script, and Braves fans were starting to wonder whether the collapse was on again.

Eddie Rosario settled the Atlanta faithful’s nerves in Game 6, blasting a three-run homer in the bottom of the fourth inning, going yard just inside the foul pole to give the Braves a 4-1 advantage. That proved to be the difference, with the Dodgers scoring just one more run after that dinger.

Say it with us…

The Dodgers made things interesting in the top of the seventh inning, however, putting runners on second and third with nobody out and cutting Atlanta’s lead to 4-2. Tyler Matzek doused cold water on LA’s rally, striking out three straight batters to preserve the Braves’ two-run advantage.

Rosario’s heroics was duly recognized as he earned MVP honors in this year’s NLCS. In the six-game series against the Dodgers, he was sensational, recording an incredible .560 batting average, 1.040 slugging percentage, three home runs, and nine RBIs.

It was an incredible achievement by the Braves, who started slowly this season and did not climb over the .500 mark until August 6. The Braves’ 88-win showed they belong, though, as they brought down the star-studded defending champions, who won 106 games during the regular season.

The Braves will have their work cut out for them in the World Series as standing in their way are the red-hot Houston Astros. Manager Dusty Baker has already announced his starter for Game 1, with Framber Valdez getting the nod for the Astros. Baker’s decision to go with Valdez was not a surprise given that he just delivered an excellent performance in his last start against the Boston Red Sox.

Valdez pitched eight innings of one-run ball in Game 5 to give Houston a 3-2 lead in the ALCS. He has taken on the mantle as the Astros’ ace after Lance McCullers Jr. strained his forearm muscle in the ALDS. Rookie right-hander Luis Garcia has stepped up in McCullers’ absence as well and is expected to start Game 2 for Houston in the World Series.

The Braves also chose their starting pitcher for Game 1 with right-hander Charlie Morton to oppose Valdez in the series opener. He got an extra two days of rest after the Braves avoided a Game 7 in the NLCS.