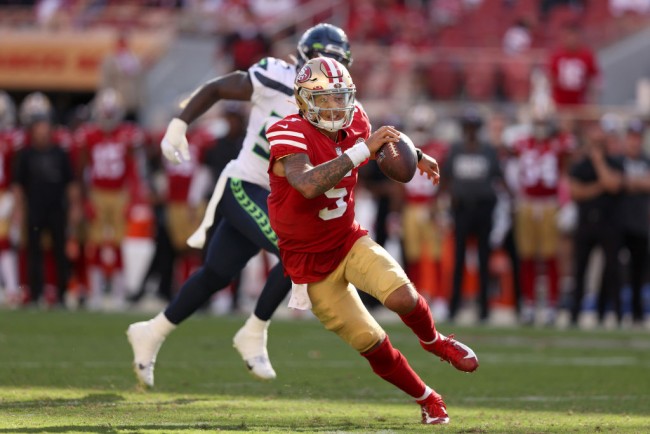 SANTA CLARA, CALIFORNIA – Trey Lance (#5) of the San Francisco 49ers scrambles with the ball during the second half against the Seattle Seahawks at the Levi’s Stadium on October 03, 2021 in Santa Clara, California. (Photo : Ezra Shaw/Getty Images)

There’s just no stopping Kyler Murray and the rest of the Arizona Cardinals. Arizona maintained its perfect start to the season with a comprehensive victory over the Los Angeles Rams in Week 4. The Cards will look to extend their winning streak even further when they take on the struggling San Francisco 49ers in a pivotal NFC West clash this coming Sunday. Here’s a preview to see who has the edge in this 49ers vs Cardinals showdown.

To say that San Francisco’s recent two-game home stand has been a disaster would be a severe understatement. On Sunday, the 49ers suffered their second consecutive loss at the Levi’s Stadium, losing 28-21 to the Seattle Seahawks in a critical divisional matchup. The defeat sent San Francisco to the bottom of the NFC West standings, with the Niners and the Seahawks sporting similar 2-2 records.

It won’t get any easier for the struggling 49ers in Week 5 as they will next face the red-hot Arizona Cardinals. The question now for the 49ers faithful is: who will be their starting quarterback for this game?

Jimmy Garoppolo suffered a calf injury in the first half of the Seahawks game and did not return. He completed 14 of 23 passes for 165 yards with one touchdown and one interception before exiting the contest. The good news for head coach Kyle Shanahan is that Garoppolo’s injury isn’t as bad as previously thought and that he has a chance of playing against the Cards.

If Garoppolo can’t recover in time for that showdown, rookie quarterback Trey Lance will be handed his first career start in the NFL. In this year’s draft, the No. 3 overall pick completed 9 of 18 passes for 157 yards and two touchdowns in the second half of their Week 4 loss.

He will be tested by a Cardinals team that possesses one of the league’s cornerbacks in Byron Murphy. He has recorded three interceptions through the first four games, becoming the first Cardinal to accomplish that feat since safety Ken Greene in 1980.

The Arizona Cardinals stretched their unbeaten run to four games with a resounding 37-20 victory Sunday over the Los Angeles Rams. It was another big victory for the Cardinals, who started the season 4-0 for the first time since 2012.

Kyler Murray was again superb for the Cards, completing 24 of 32 passes for 268 yards with a couple of touchdowns. He has been a beast for Arizona to start the 2021 campaign, recording 1,273 passing yards through the Cards’ first four games, second only behind Tampa Bay’s Tom Brady in that department.

What sets Murray apart from Brady is his speed on the ground. He ran for 39 yards on six carries against the Rams, including a successful first-down scramble on a 3rd and 16 situation. Arizona’s ground attack was exceptional against LA, racking up 216 yards rushing in Week 4. Chase Edmonds and James Conner wreaked havoc against the Rams’ vaunted defensive line, combining for 170 rushing yards and two scores.

Here is Everything You Need to Know About Big Data Analysts