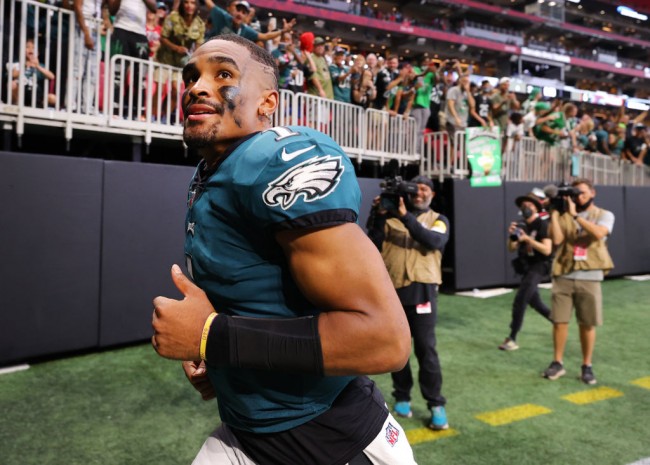 ATLANTA, GEORGIA – Jalen Hurts of the Philadelphia Eagles celebrates after the game against the Atlanta Falcons at the Mercedes-Benz Stadium on September 12, 2021 in Atlanta, Georgia. (Photo : Kevin C. Cox/Getty Images)

This coming Sunday, two NFL teams will put their unbeaten records on the line as the San Francisco 49ers and the Philadelphia Eagles square off in an intriguing Week 2 clash at Lincoln Financial Field. Read on below for a preview of this much-anticipated NFC showdown, 49ers vs Eagles.

San Francisco’s Week 1 victory against the Detroit Lions came at a huge price as two of their key players suffered major injuries on Sunday. Cornerback Jason Verrett tore the anterior cruciate ligament in his right knee, an injury that will require immediate surgery and rule him out for the rest of the season.

On the offensive side of the ball, running back Raheem Mostert’s knee had chipped cartilage and will miss around eight weeks as a result. Mostert will need arthroscopic surgery to repair the injury and will be placed on the injured reserve for the meantime.

Those injuries took the shine away from the Niners’ 41-33 win, a game that saw them almost squander a huge 28-point lead in the second half. The good news for the 49ers is that rookie running back Elijah Mitchell played excellent in that contest.

Elijah Mitchell takes it straight to the house 🏠 pic.twitter.com/zkf8mz7vOt

In Mostert’s absence, Mitchell stepped up big time, setting a 49ers franchise record for rushing yards in a debut with 104 on 19 carries. However, he will have his work cut out against an Eagles defense that didn’t allow a single rushing touchdown in Week 1.

Philadelphia Eagles head into the 49ers game as +3 underdogs

Philadelphia’s 2021 NFL campaign is off to a spectacular start after the Eagles crushed the Atlanta Falcons, 32-6, in their opening game on Sunday. Jalen Hurts dazzled in his season debut, throwing three touchdowns and recording no interceptions. He completed 27 of 35 passes for 264 yards, dishing out TD throws to DeVonta Smith, Jalen Reagor, and Dallas Goedert.

Hurts showed he could do damage on the ground as well, rushing for 62 yards to help Philadelphia score at least 30 points for the first time since Week 17 of the 2019 season. This was Hurts’ third career game wherein he passed for at least 250 yards and ran for 50-plus yards, showing the league why he is considered a legitimate dual threat.

Things are bound to get more challenging, though, in Week 2 when the Eagles face premier defensive end Nick Bosa and the rest of the San Francisco 49ers. That being said, the Eagles’ offense is firing on all cylinders now, thanks in large part to the burgeoning chemistry between Hurts and rookie wide receiver DeVonta Smith.

In his first NFL game, Smith wasn’t fazed at all, catching six passes for 71 yards and a touchdown. Hurts and Smith will look to dissect a 49ers secondary that will be without Jason Verrett.

49ers win and cover the spread.

Most Stunning Quantum Experiments that Will Definitely Excite You