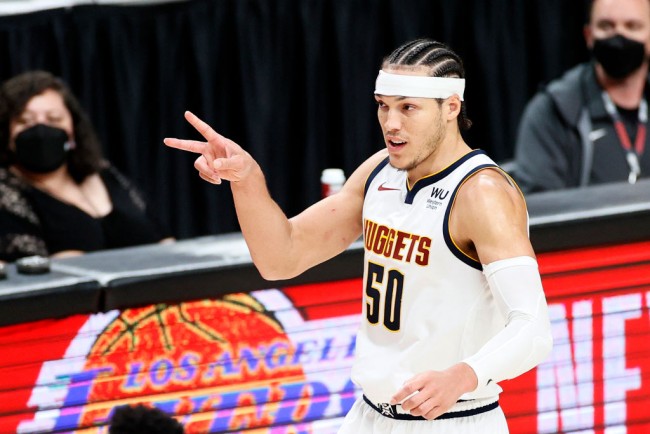 PORTLAND, OREGON – Aaron Gordon of the Denver Nuggets reacts after his three point basket against the Portland Trail Blazers in the fourth quarter during Round 1, Game 6 of the 2021 NBA Playoffs at the Moda Center on June 03, 2021 in Portland, Oregon. (Photo : Steph Chambers/Getty Images)

Aaron Gordon has just committed his future to the Denver Nuggets. The star forward agreed to a massive four-year, $92 million contract extension on Tuesday, according to Gordon’s agent Calvin Andrews of Klutch Sports in a report by The Athletic.

Gordon had one year left on his current deal, but that contract has now been stretched until the 2025-26 season. The final year of Gordon’s contract will have a player option. Financial details of the deal have been revealed to ESPN‘s Bobby Marks, and it includes a base salary worth $88 million and incentives amounting to $4 million.

Gordon, who will turn 26 on Thursday, played in 25 games for Denver last season after the trade from Orlando, averaging 10.2 points on a career-high 50% shooting from the floor and 4.7 rebounds. Gordon raised his production in the playoffs, averaging 11.1 points and 5.4 rebounds as Denver made it to the second round before being swept by the eventual Western Conference champions Phoenix Suns.

Gordon’s biggest impact last season came on the defensive end as he held the opponents that he guarded to 3.2% worse shooting marks than their normal averages. Gordon showed glimpses of that in the first round of last year’s playoffs, where he helped an injury-plagued Nuggets side eliminate Damian Lillard and the rest of the Portland Trail Blazers in an epic six-game series.

Gordon to provide the defensive spark for Denver

Knowing that they lacked that defensive grit in the past, the Nuggets decided to splash the cash on Gordon and make him part of their core. The upcoming 2021-22 campaign will be Gordon’s eighth season in the NBA.

Gordon arrived in the league with high expectations after being selected No. 4 overall by Orlando in the 2014 NBA draft, but he has yet to leave his mark in the postseason as the Magic struggled to reach that stage during his previous stint there. However, he became a fan favorite with his exploits in the NBA Slam Dunk contest, where he controversially finished runner-up twice.

Gordon will look to boost his playoff stock instead with the Nuggets, who have two of the league’s best players in MVP Nikola Jokic and star point guard Jamal Murray. They have already signed Jokic and Murray to five-year deals in 2018 and 2019, respectively. The next big deal that needs to be settled by Denver is for sharpshooter Michael Porter Jr. He stepped up big time in Murray’s absence last season, averaging 19 points per game.