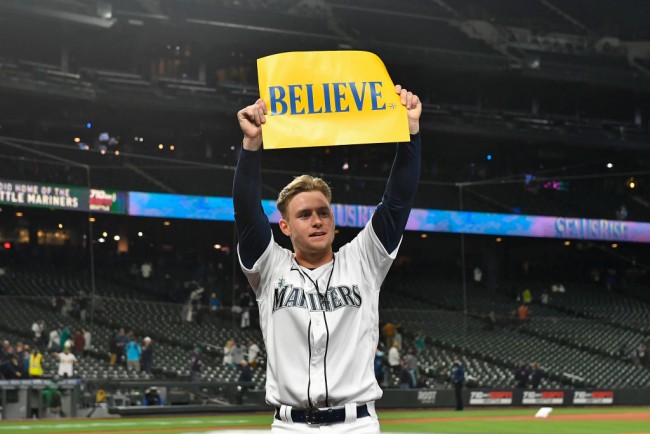 SEATTLE, WASHINGTON – Jarred Kelenic of the Seattle Mariners holds up a “Believe” sign after the game against the Oakland Athletics at the T-Mobile Park on September 29, 2021 in Seattle, Washington. The Mariners won 4-2. (Photo : Alika Jenner/Getty Images)

The American League Wild Card race is heating up with just four days remaining in the regular season. The New York Yankees, Boston Red Sox, Toronto Blue Jays, and the Seattle Mariners are locked in a tight battle to determine who will secure the two wild card spots in the AL.

Only two games separate the four teams after the Yankees lost to the Blue Jays on Wednesday. It was a huge loss for the Bronx Bombers, who had ace Gerrit Cole on the mound. The Blue Jays kept their playoff hopes alive, though, thanks to Bo Bichette, who homered twice to power the 6-5 win.

Toronto stays in the playoff picture after win over New York

It was a historic night for the Blue Jays as they became the first team since the Atlanta Braves in 2003 to have four players record at least 100 RBIs in a single season. With the win, Toronto moved to within two games of New York for the top wild card spot and just one game behind Boston for the second wild card spot.

The Red Sox managed to stay clear of the chasing pack after a critical 6-0 win over the Baltimore Orioles. J.D. Martinez belted his 28th home run of the season to help Boston snap its four-game losing streak. They trail the Yankees by one game in the race for the top wild card spot.

Boston is in a precarious situation, though, as the Seattle Mariners are gaining ground fast. The Mariners won their fourth straight game on Wednesday, beating the Oakland Athletics, 4-2. The Mariners fell behind 1-0, but a Jarred Kelenic double in the bottom of the sixth gave Seattle a 2-1 edge.

The A’s tied the game in the seventh inning on a Seth Brown homer, but the Mariners grabbed the win in the end, thanks to Ty France’s sac fly in the bottom of the seventh and Abraham Toro’s homer in the eighth. The Mariners have dominated the A’s lately, winning each of their last 12 meetings and eliminating Oakland in the process.

The Mariners will have a day off on Thursday before hosting the Los Angeles Angels for their final three-game series of the season. They can still gain some ground on the opposition as the Yankees face the Blue Jays and the Red Sox square off with the Orioles on Thursday.

The Yankees will return home to the Bronx for their final three-game set to host the AL East leaders Tampa Bay Rays. The Blue Jays will also have home-field advantage in their last three games, with Toronto hosting Baltimore.

Among the wild card contenders, the Red Sox are the only team that will be on the road when they play their final series. They will travel to D.C. to face the Washington Nationals for that pivotal three-game set.

How to Profit from a World of Big Data, Analytics, and Artificial Intelligence”