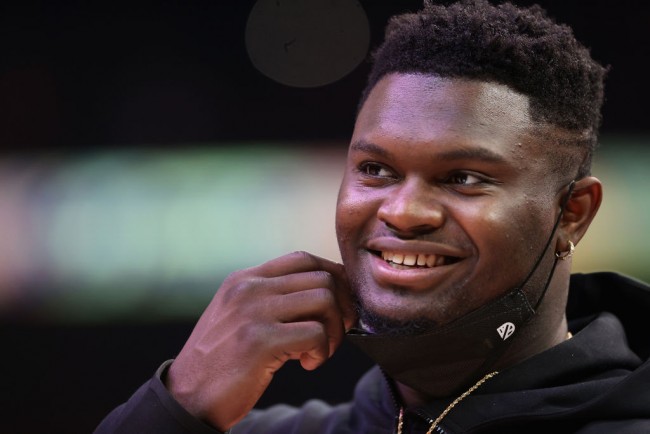 PHOENIX, ARIZONA – Zion Williamson #1 of the New Orleans Pelicans reacts during a time-out from the second half of the NBA game against the Phoenix Suns at Footprint Center on November 02, 2021 in Phoenix, Arizona. The Suns defeated the Pelicans 112-100. (Photo : Christian Petersen/Getty Images)

The Zion Williamson injury saga took another dramatic twist on Thursday after the New Orleans Pelicans announced that the star forward’s much-anticipated return to the NBA floor would be delayed once again. The Pelicans arrived at that decision after Williamson experienced soreness in his surgically repaired right foot.

Williamson was scheduled to participate in the Pelicans’ practice on Thursday, his first full one since fracturing his right foot just before the start of the season. After Williamson told the team that his right foot was sore the past few days, the Pelicans decided to put those plans on hold.

The good news for New Orleans is that the pain Williamson is feeling right now is not sharp, and the Pelicans are confident that this will not be a major issue moving forward. That being said, the Pelicans are proceeding with caution again with their franchise player.

New Orleans coach Willie Green backed that stance, telling reporters that what Williamson is experiencing right now is part of the process. Green added, “When you’re dealing with injuries and you ramp up some, there’s a possibility you can deal with a little bit of soreness which he’s dealing with now.”

Scans were taken on Williamson’s injured foot on November 24, and the latest images showed no additional damage, meaning that no new injury or reinjury, for that matter, has transpired. What makes Williamson’s latest setback so frustrating for the Pelicans is that he had already progressed to 4-on-4 full-court work for New Orleans. The Pelicans will assign low-impact work to Williamson again to help alleviate the soreness in his foot.

Pelicans not rushing Zion’s return to protect his career

Green told reporters that Williamson was frustrated with the latest development, but he reminded his ward that it is more important to be patient right now. Green said that the Pelicans need to be diligent about getting Zion back on the floor as they want to protect his NBA career. That also applies to their other players, with Green saying that they are “too important to do something like that.”

The Pelicans have struggled mightily without Williamson in their lineup, losing 18 of their first 24 games this season. They have the third-worst record in the Western Conference, and it is starting to feel like another lost season for the Pelicans.

Williamson was a beast for New Orleans last season, averaging 27 points, 7.2 rebounds, and 3.7 assists in 61 games. Unfortunately for the Pels, injuries have ravaged his young NBA career thus far. He has failed to start a campaign for New Orleans in two of the past three seasons. This foot problem may be his worst injury yet, with Pelicans fans seeing no end in sight to Williamson’s woes.

How is AI Revolutionizing the Telecommunications Industry?