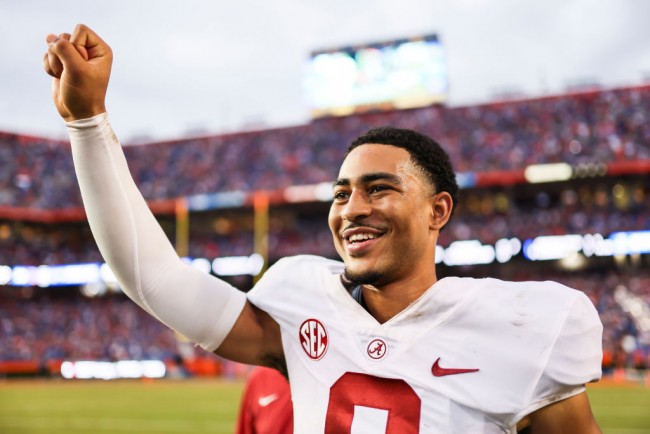 Alabama maintained its No. 1 position in the Associated Press Top 25 poll after escaping Week 3 with a narrow 31-29 win over Florida on Saturday. That was the Crimson Tide’s closest margin of victory during their current 17-game winning streak, causing Alabama to receive just 59 of the 62 first-place votes.

The three remaining first-place votes went to No. 2 Georgia. On Saturday, the Bulldogs consolidated their spot in the top two after destroying the South Carolina Gamecocks, 40-13. In his return to the starting lineup, JT Daniels starred for Georgia, completing 23 of 31 passes for 303 yards with three touchdowns and one interception against the Gamecocks.

Oregon and Oklahoma swapped places, with the Ducks moving up to No. 3 and the Sooners slipping to No. 4. The Ducks wrapped up their non-conference schedule in style, crushing Stony Brook, 48-7, to remain undefeated this season. Starting quarterback Anthony Brown led the Ducks in the one-sided victory, completing 14 of 18 passes for 159 yards with a score.

Oklahoma dropped a place after the Sooners narrowly defeated Nebraska, 23-16, on Saturday. Oklahoma’s defensive line prevented Nebraska from scoring a huge upset, holding the Huskers to just 95 yards rushing in their showdown. The Sooners recorded 10 tackles for loss and five sacks, limiting Adrian Martinez to 34 yards on 17 carries.

Iowa remained at No. 5 for the second week running after the Hawkeyes dismantled the Kent State Golden Flashes, 30-7. Iowa’s defense stole the show in this contest, sacking Kent State quarterback Dustin Crum seven times. Tyler Goodson provided the offense for Iowa, rushing for 153 yards and three touchdowns in a dominating performance on the ground.

Related Article: Huge Blow for Michigan: Wolverines WR Ronnie Bell Out for the Season Due to Right Knee Injury

The biggest climber in the poll is Penn State, with the Nittany Lions jumping to No. 6 after their 28-20 victory over the Auburn Tigers. This is Penn State’s best ranking since November 3, 2019, when the Nittany Lions were handed the No. 5 position. Jahan Dotson did it all in the win against Auburn, nabbing 78 receiving yards and a touchdown, throwing a 22-yard pass, and even recording a 16-yard punt return.

Texas A&M and Cincinnati were ranked No. 7 and No. 8, respectively, after recording comprehensive victories over New Mexico and Indiana. The biggest surprise in this week’s poll was the demotion of both Clemson and Ohio State.

The two powerhouse programs slipped to the back of the top 10 after recording unconvincing wins in Week 3. The Tigers’ offense struggled against Georgia Tech, scoring just 14 points. On the other hand, the Buckeyes’ defense failed to impress as they allowed winless Tulsa to score 20 points.

Manchester United striker on his way to Barcelona?