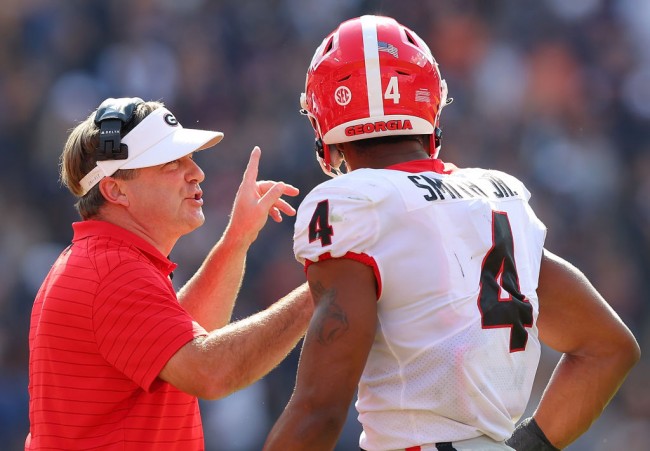 AUBURN, ALABAMA – Head coach Kirby Smart of the Georgia Bulldogs converses with Nolan Smith (#4) against the Auburn Tigers during the first half at the Jordan-Hare Stadium on October 09, 2021 in Auburn, Alabama. (Photo : Kevin C. Cox/Getty Images)

There is a new king in the AP Top 25 poll, with the Georgia Bulldogs assuming the top position in the college football rankings entering Week 7 of the 2021 NCAA season. Georgia jumped to No. 1 by a unanimous vote after the Bulldogs beat Auburn by 24 points, and Alabama suffered a shock defeat to Texas A&M in Week 6.

Georgia returns to the No. 1 spot after 13 years

This is the 16th time the Bulldogs had held the top spot in the college football rankings and the first time to be a unanimous No. 1 in the AP Top 25 poll. The last time Georgia was ranked No. 1 was back in 2008 during that year’s preseason poll.

Powering Georgia’s ascent to the top of the rankings had been its excellent defense. The Bulldogs lead the nation in scoring defense, allowing an average of just 5.5 points per game this season.

Iowa, Cincinnati, and Oklahoma climb up in top 5

Georgia was not the only team to benefit from Alabama’s upset loss as several teams rose to rare heights in the top 5 after the Week 6 games. Iowa moved up one spot to No. 2 after the Hawkeyes prevailed in their top-5 showdown with the Penn State Nittany Lions in Week 6. The Hawkeyes came from behind to record the 23-20 win and secure their best ranking since they reached the top spot in 1985.

The Iowa locker room after the big win against Penn State 💛

The Cincinnati Bearcats also had their best ranking ever, moving up to No. 3 after a resounding 52-3 win over the Temple Owls on Saturday. Jerome Ford starred for the Bearcats in that victory, running for a career-high 149 yards and two touchdowns.

Oklahoma also barged into the top 5 after stunning Texas in the Red River Showdown. The Sooners moved up two spots to No. 4 in the rankings after beating the Longhorns in dramatic fashion on Saturday. Kennedy Brooks ran for 217 yards and two go-ahead scores in the final period for the Sooners, who overcame a 28-7 deficit after the opening quarter.

Big Ten teams dominated the bottom half of the top 10, with Ohio State, Penn State, Michigan, and Michigan State ranked sixth, seventh, eighth, and 10th, respectively. This is the first time since AP started making college football polls in 1936 that the Big Ten has five top-10 teams in the rankings.

Top 10 Trending Cryptocurrency Jobs to Apply in October in India