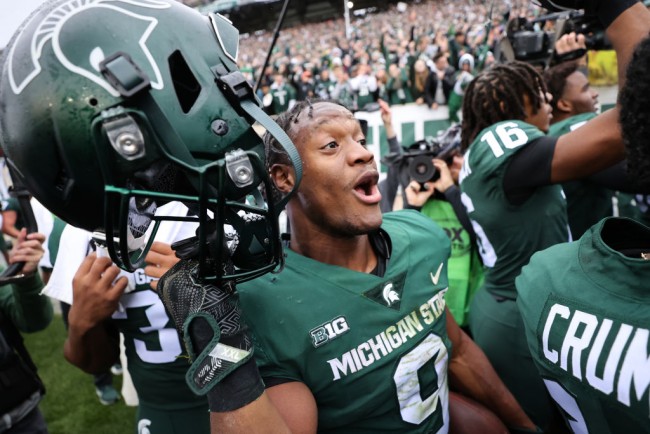 Michigan State and Wake Forest were the big winners in college football after an eventful Week 9. The Spartans were rewarded in the polls ahead of Week 10, with Michigan State moving up to fifth, jumping past Ohio State in the updated Associated Press (AP) Top 25 rankings. Wake Forest’s stock also rose after Week 9, with the Demon Deacons soaring to the tenth spot.

Michigan State barged into the top 5 of the college football rankings after a stunning 37-33 come-from-behind win over Michigan in Week 9. Both teams knew beforehand that their showdown had huge implications in this week’s rankings as they were ranked in the top 10 ahead of their clash for the first time since 1964.

Michigan State’s victory would not be possible without the heroics of running back Kenneth Walker III. He had a banner day for the Spartans, rushing for 193 yards and five touchdowns against the Wolverines, including the go-ahead score with 5:08 remaining in the fourth quarter.

It was a huge win for the Spartans, who trailed 30-14 at one stage. They outscored the Wolverines 23-3 the rest of the way to hand Michigan just its second loss in 91 games, leading by at least 16 points since 2004. The defeat was costly for the Wolverines, who fell three spots to No. 9 in this week’s poll.

Wake Forest’s college football program made history after the Demon Deacons landed in the top 10 of the poll for the very first time. Wake Forest accomplished that feat after it destroyed Duke, 45-7, in Week 9.

The Georgia Bulldogs solidified their hold of the top spot after a comprehensive 34-7 win over the Florida Gators in their rivalry game. The Bulldogs received all 63 first-place votes to nab the top position for the fourth consecutive week. Cincinnati remained at No. 2 after the Bearcats defeated Tulane, 31-12.

Alabama’s bye week did not affect its standing as the Crimson Tide held on to the No. 3 ranking. They managed to stave off the Oklahoma Sooners, who remained at No. 4 despite their resounding 52-21 win over the Texas Tech Red Raiders.

The Ohio State Buckeyes dropped to No. 6 after a less impressive win over the Penn State Nittany Lions. The Oregon Ducks maintained their No. 7 position after a 52-29 victory over the Colorado Buffaloes, while the Notre Dame Fighting Irish jumped to No. 8 following their 44-34 win over the North Carolina Tar Heels.