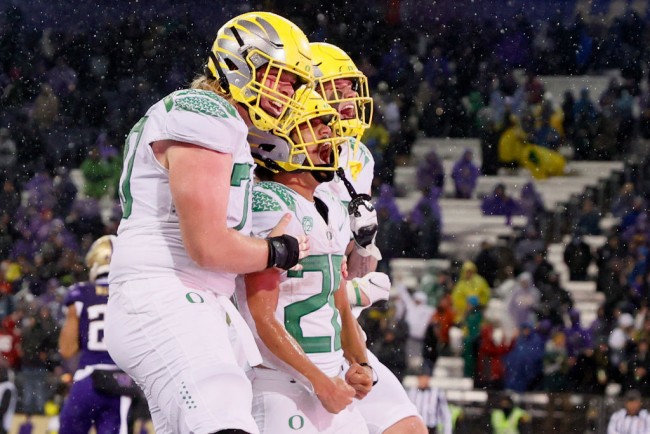 SEATTLE, WASHINGTON – NOVEMBER 06: Travis Dye #26 of the Oregon Ducks reacts after his touchdown with offensive lineman Dawson Jaramillo #70 and Terrance Ferguson #19 of the Oregon Ducks against the Washington Huskies during the fourth quarter at Husky Stadium on November 06, 2021 in Seattle, Washington. (Photo : Steph Chambers/Getty Images)

Oregon and Notre Dame were the big winners in college football after Week 10. The Ducks were rewarded in the polls ahead of Week 11, with Oregon moving up to fifth, jumping past Ohio State in the updated Associated Press (AP) Top 25 rankings. Notre Dame’s stock also rose after Week 10, with the Fighting Irish soaring to the seventh spot.

Oregon barged into the top 5 of the college football rankings after an impressive 26-16 come-from-behind win over Washington in Week 10. The Ducks scored 21 unanswered points at one stage, turning a 9-3 deficit into a 24-9 lead in the fourth quarter. That was enough for the Ducks to grab the win as they held on for the 10-point victory.

Travis Dye starred for the Ducks in this rivalry game, rushing for a career-high 211 yards and a touchdown on 28 carries. Dye’s 211-yard performance on the ground was the most yards rushing by an Oregon player against the Washington Huskies since Jonathan Stewart ran for 251 yards in 2007.

That victory allowed Oregon to leapfrog Ohio State, which struggled in a 26-17 road win against Nebraska in Week 10. Oregon defeated Ohio State earlier this season which remains the signature victory on the Ducks’ schedule.

The Georgia Bulldogs remained on top of the AP rankings after a comprehensive 43-6 win over the Missouri Tigers in Week 10. The Bulldogs received all 63 first-place votes to nab the No. 1 position for the fifth consecutive week.

The Cincinnati Bearcats held on to the No. 2 spot after a narrow 28-20 win over Tulsa. That performance would not help their standing in the College Football Playoff rankings where they ended up in sixth place on its initial release last week.

Alabama remained at No. 3 as the Crimson Tide also underwhelmed in their 20-14 win over the LSU Tigers. Alabama failed to get its ground game going against LSU, with running back Brian Robinson managing just 18 yards on 13 carries.

They gained just 49 rushing yards in the win against LSU, averaging a paltry 2.2 yards per carry. Bryce Young carried the scoring cudgels for Alabama with its running game in disarray, completing 24 of 27 passes for 302 yards with two touchdowns.

Oklahoma’s bye week did not affect its standing as the Sooners held on to the No. 4 ranking. The Michigan State Spartans dropped three spots to No. 8 after a shock 40-29 loss to the Purdue Boilermakers. Michigan State’s loss comes a week after the Spartans recorded a statement win over Michigan.

The Notre Dame Fighting Irish jumped to No. 7 following their 34-6 win over the Navy Midshipmen. The Irish outgained the Midshipmen 279-56 in the opening half, helping Notre Dame cruise to the easy win.

10 Cryptocurrencies in November to Buy for Big Benefits