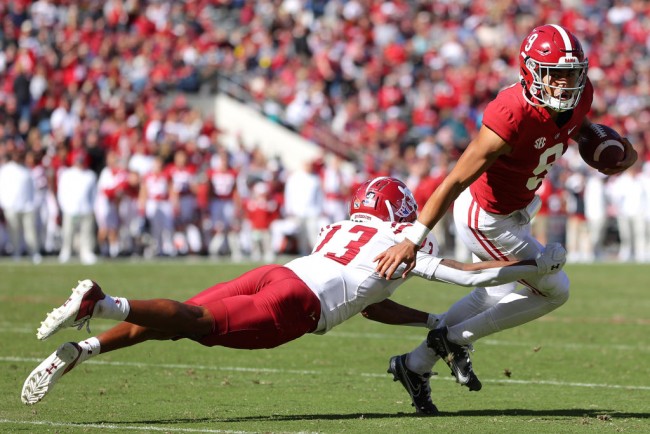 TUSCALOOSA, ALABAMA – NOVEMBER 13: Bryce Young #9 of the Alabama Crimson Tide fights off a tackle by Syrus Dumas #13 of the New Mexico State Aggies in the second quarter in the game at Bryant-Denny Stadium on November 13, 2021 in Tuscaloosa, Alabama. (Photo : Kevin C. Cox/Getty Images)

Alabama and Oregon were the big winners in college football after Week 11. The Crimson Tide were rewarded in the polls ahead of Week 12, with Alabama moving up to second in the updated Associated Press (AP) Top 25 rankings. Oregon’s stock also rose after Week 11, with the Ducks soaring to the fourth spot.

Alabama and Cincinnati swapped places after recording contrasting victories in Week 11. The Crimson Tide demolished the New Mexico State Aggies, 59-3, to improve their record this season to 9-1. Bryce Young was exceptional for Alabama, completing 21 of 23 passes for 270 yards with five touchdowns and no interceptions in the win against New Mexico State.

Bryce Young is the first player in @AlabamaFTBL history to throw 5 TD passes in a single half. pic.twitter.com/pZ1qMyOGtd

The Cincinnati Bearcats maintained their unbeaten record with a 45-28 win over South Florida. That was not enough, however, for them to retain the No. 2 position as voters were not impressed with their 17-point win over an inferior opponent. It is the latest blow for the Bearcats, who have failed to crack the top four in the College Football Playoff rankings despite their perfect start to the season.

The Oregon Ducks and the Ohio State Buckeyes benefited from Oklahoma’s stunning 27-14 loss to Baylor in Week 11, climbing up to fourth and fifth, respectively, in this week’s rankings. As a result of that shock defeat, the Sooners crashed out of the top 10 as they dropped from No. 4 in last week’s AP Top 25 poll to No. 12 this week. The Sooners found themselves trailing the Bears in the rankings with Baylor climbing seven spots to No. 11.

Oregon extended its winning streak to five games with a 38-24 victory over Washington State. Anthony Brown recorded 135 yards through the air and 123 yards on the ground in the win against the Cougars. Travis Dye and Bryon Cardwell wreaked havoc in the run game, combining for 186 rushing yards for the Ducks.

Ohio State barged into the top 5 of the AP poll following the Buckeyes’ 59-31 win over the Purdue Boilermakers. CJ Stroud dazzled in this Big Ten matchup, completing 31 of 38 passes for 361 yards with five touchdowns and no interceptions. The Buckeyes improved to 9-1 with the win. Notre Dame, Michigan State, Michigan, Oklahoma State and Ole Miss all jumped one place after Oklahoma’s massive drop.

The Georgia Bulldogs remained on top of the AP rankings after a comprehensive 41-17 win over the Tennessee Volunteers in Week 11. The Bulldogs received all 62 first-place votes to nab the No. 1 position for the sixth consecutive week. Georgia was tested in this matchup with Tennessee taking a 10-7 lead at the end of the first quarter. The Bulldogs outscored the Volunteers, 34-7, the rest of the way to remain undefeated through their first 10 games.

Everything About Information Security Analysts at a Glance