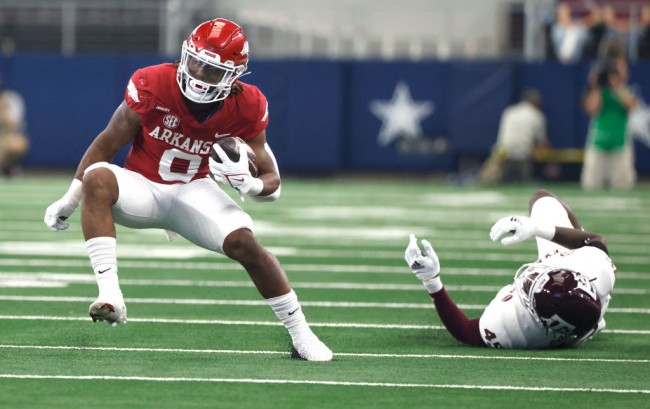 ARLINGTON, TX – AJ Green (#0) of the Arkansas Razorbacks eludes Edgerrin Cooper (#45) of the Texas A&M Aggies before scoring a touchdown in the first half of the Southwest Classic at the AT&T Stadium on September 25, 2021 in Arlington, Texas. (Photo : Ron Jenkins/Getty Images)

Notre Dame and Arkansas were the big winners in college football in Week 4. The Fighting Irish and the Razorbacks were rewarded in the polls, with both teams moving up to the top 10 of the updated Associated Press (AP) Top 25 rankings.

Notre Dame jumped up to No. 9 after checking in at No. 12 last week, thanks to the Fighting Irish’s comprehensive 41-13 win over the Wisconsin Badgers. Despite playing with a third-string quarterback, Notre Dame grabbed the victory after Jack Coan exited the game with an injury.

Drew Pyne stepped up big time for the Irish, who scored 31 unanswered points in the fourth quarter to turn a 13-10 deficit into a 41-13 rout. The red shirt freshman completed 6 of 8 passes for 81 yards with one touchdown.

However, Notre Dame’s defense stole the show, with the Irish scoring 31 of their 41 points off the Badgers’ turnovers. They held Graham Mertz to 18 of 41 on his passing attempts, with the Wisconsin quarterback recording four interceptions and a lost fumble. The Irish’s third down defense was superb, with Wisconsin failing to convert 13 of its 14 third down opportunities.

Hey, Chicago, what do you say — THAT’S AN IRISH WIN TODAY!

Arkansas was the biggest gainer in the AP Top 25 poll, jumping up eight spots to No. 8 after scoring a huge win over Texas A&M in the Southwest Classic. The Razorbacks defeated the Aggies, 20-10, on CBS Game of the Week at the AT&T Stadium to hand Texas A&M its first loss of the season. That proved costly for the Aggies as they dropped down eight spots to No. 15.

Clemson drops down to No. 25 after shock Week 4 loss

That wasn’t the biggest shocker, though, in the Week 5 poll. Clemson fell 16 spots, dropping all the way to No. 25 after the Tigers suffered a stunning 27-21 double-overtime road defeat to NC State.

It was a massive fall for the Tigers, who are not in the top 10 rankings for the first time since October 2015. The Wolfpack benefited from that upset win, making their debut in the AP Top 25 poll for this year at No. 23.

THE TD THAT GAVE NC STATE THE WIN OVER NO. 9 CLEMSON 🔥 pic.twitter.com/7kiAfcXicQ

Alabama held on to the No. 1 spot after thrashing Southern Miss, 63-14. The Crimson Tide received 58 of the 62 first-place votes thanks to that monster win. Georgia remained at No. 2 after destroying Vanderbilt, 62-0. Oregon defeated Arizona, 41-19, to stay at No. 3 for the second week running.

The Penn State Nittany Lions moved up to No. 4 in the rankings after an impressive 38-17 win over the Villanova Wildcats. Oklahoma dropped two spots to No. 6 after the Sooners managed just a narrow 16-13 victory against the West Virginia Mountaineers.