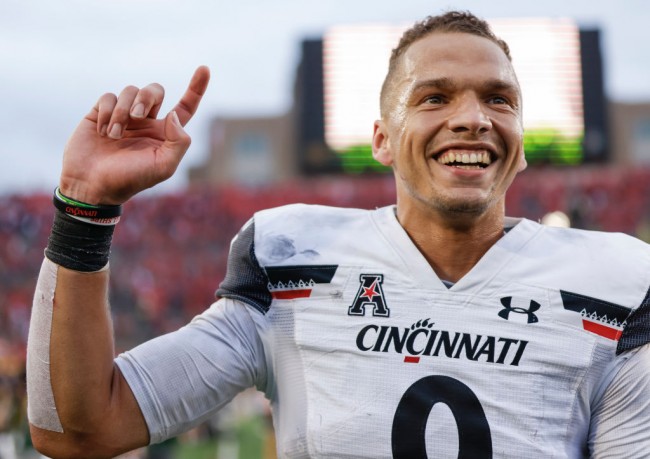 Cincinnati and Michigan were the big winners in college football in Week 5. The Bearcats were rewarded in the polls ahead of Week 6, with Cincinnati moving up to the top 5 of the updated Associated Press (AP) Top 25 rankings. Michigan’s stock also rose after Week 5, with the Wolverines jumping into the top 10 for the first time since 2019.

Cincinnati jumped up to No. 5 after checking in at No. 7 last week, thanks to the Bearcats’ comprehensive 24-13 victory over the Notre Dame Fighting Irish. The Bearcats impressed in the first top-10, regular-season matchup in their program’s history as they bolstered their bid to become the first team outside the Power Five conferences to reach the College Football Playoff.

Desmond Ridder starred for Cincinnati in the Week 5 win, completing 19 of 32 passes for 297 yards and a couple of touchdowns. He linked up well with wide receiver Alec Pierce, who caught six passes for 144 yards. The Bearcats wreaked havoc through the air in this contest, with Leonard Taylor and Tre Tucker combining for 104 receiving yards and two scores.

Desmond Ridder with an absolute NFL throw when UC needed it most, to try and put the Irish away in South Bend. pic.twitter.com/18kPSeXgQD

The win propelled Cincinnati to its highest ranking since 2009, while the loss proved to be costly for Notre Dame, with the Fighting Irish dropping to No. 14.

Iowa, Penn State jump one place ahead of top-5 showdown

Iowa moved up to No. 3 after crushing Maryland, 51-14, on Saturday. Spencer Petras was simply unstoppable in this contest, throwing for three touchdowns and running for another two scores to spearhead the rout.

The one-sided win wouldn’t be possible without the heroics of the Hawkeyes defense as Maryland committed a total of seven turnovers, five of which came from interceptions of Taulia Tagovailoa’s passes. It was a stunning performance by the Iowa D as Tagovailoa threw just one interception before this contest.

Penn State also moved up to No. 4 after a 24-0 demolition of the Indiana Hoosiers. Both Penn State and Iowa jumped up in the rankings after then No. 3 Oregon lost in an upset in Week 5 to Stanford in the Pac-12. This coming Saturday, Penn State and Iowa will face each other in a titanic Big Ten showdown, the first time since 1985 that Kinnick Stadium will host a game between two top-five teams.

Michigan has the lead against the Badgers so they joined in on Wisconsin’s Jump Around pic.twitter.com/icf67zTpUm

Michigan’s stock also went up this past week after the Wolverines destroyed the Wisconsin Badgers, 38-17. It was a momentous victory for Jim Harbaugh, who recorded his first win in Madison as Michigan’s head coach. The 21-point rout was also Harbaugh’s first win as an underdog with Michigan.

Alabama held on to the No. 1 spot, receiving 53 of the 62 first-place votes after a resounding 42-21 win over Ole Miss. Georgia remained at No. 2 after trouncing Arkansas, 37-0.