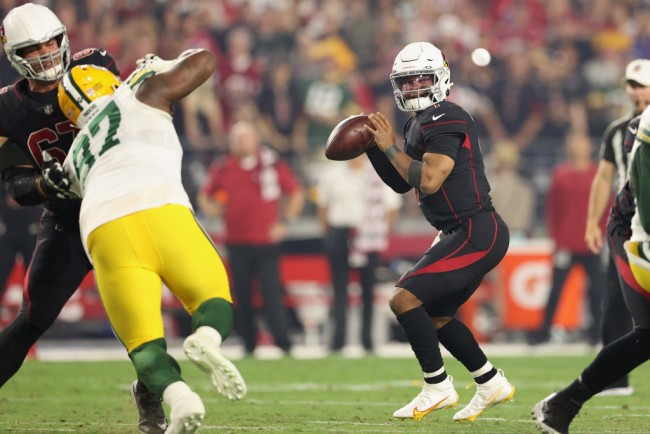 GLENDALE, ARIZONA – Quarterback Kyler Murray (#1) of the Arizona Cardinals looks to pass during the second half of the NFL game at State Farm Stadium on October 28, 2021 in Glendale, Arizona. The Packers defeated the Cardinals 24-21. (Photo : Christian Petersen/Getty Images)

San Francisco has not enjoyed home-field advantage thus far this season, with the 49ers losing all of their three games at the LeVi’s Stadium. They will look to end that losing skid in Week 9 when they host the Arizona Cardinals. Read our preview to see who has the edge in this Cardinals vs 49ers showdown.

The Arizona Cardinals are no longer undefeated. They picked up their first defeat of the season in gut-wrenching fashion, losing 24-21 to the undermanned Green Bay Packers on Thursday Night Football. They had no answer for Aaron Rodgers and Randall Cobb, who combined for a couple of touchdowns.

The Cardinals will look to get their season back on track when they take on the San Francisco 49ers this coming Sunday. For the Cards to record the much-needed win, they will need to execute much better on the offensive end. Kyler Murray struggled mightily against the Packers, completing just 22 of 33 passes for 274 yards with no touchdowns and two interceptions.

Murray’s last pick all but sealed Arizona’s fate in that contest, throwing an interception to Rasul Douglas in the corner of the end zone with 12 seconds remaining. He floated a pass to A.J. Green for what was supposed to be the game-winning touchdown, but the wide receiver did not turn around to receive the ball. Douglas pounced on that error to grab an unlikely win for Green Bay.

To make matters worse for the Cards, Murray suffered an ankle injury in the final minute of that contest as he was seen limping off the field after that primetime game. The good news for Arizona is that Murray is good to go for the game against the 49ers, according to coach Kliff Kingsbury. Murray’s left ankle did not appear swollen during his news conference on Wednesday, and he was walking without issue.

The San Francisco 49ers finally snapped their four-game losing skid with a 33-22 victory over the Chicago Bears. It was a critical win for the 49ers, who trail the Los Angeles Rams and the Arizona Cardinals by just 3.5 games in the NFC West standings.

The 49ers can gain more ground on the Cardinals with a victory over their division rivals this weekend. For the 49ers to accomplish that task, they will need Jimmy Garoppolo to replicate his play in Week 8. He was superb in the win against the Bears, completing 17 of 28 passes for 322 yards and scoring two rushing touchdowns.

He was outstanding, particularly in the second half, leading San Francisco to four scoring drives, three of which ended in touchdowns. In the third quarter, he scored a two-yard rushing touchdown and ran for a five-yard score in the fourth quarter that gave the 49ers a 30-22 lead.

He got some help from Deebo Samuel, who caught six passes for 171 yards. Elijah Mitchell wreaked havoc on the ground for the 49ers, rushing for 137 yards and a touchdown on 18 carries. They will have their work cut out for them, however, against an Arizona team that is third in the NFL in scoring defense, allowing just 17.3 points per game this season.

San Francisco stuns Arizona to record its first home win of the season.

The Role of Women in Scalping up AI and Data Science

The Fuel that is Boosting Transformation in Every Industry- AI