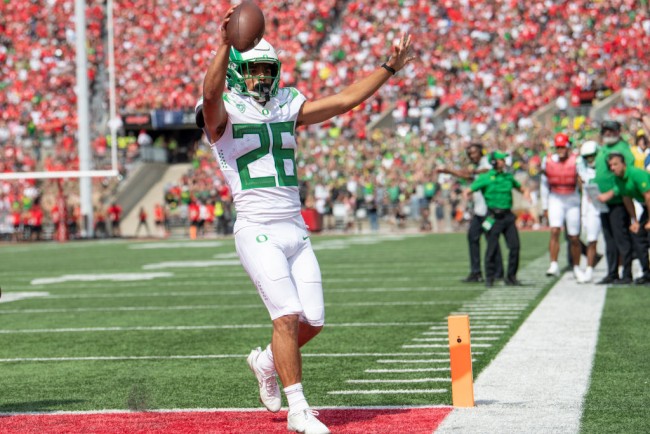 COLUMBUS, OH – Travis Dye of the Oregon Ducks scores a touchdown during the 3rd quarter against the Ohio State Buckeyes at the Ohio Stadium on September 11, 2021 in Columbus, Ohio. (Photo : Gaelen Morse/Getty Images)

Oregon’s perfect start to the season continued on Saturday with a 41-point victory over Stony Brook. The Ducks will look to extend their winning streak even further when they take on the struggling Arizona Wildcats in Week 4. Read on below for an in-depth preview of this Arizona vs Oregon showdown.

Arizona’s losing woes show no sign of ending as the Wildcats suffered a humiliating 21-19 defeat at the hands of the Northern Arizona Lumberjacks. The Wildcats have now lost each of their last 15 games, a skid that began in 2019.

It won’t get any easier for Arizona in Week 4 as the Wildcats begin their Pac-12 play against the vaunted Oregon Ducks. For the Wildcats to record a stunning upset and cover the vast +28.5 point spread, they will need wide receiver Stanley Berryhill to play some inspired football against Oregon.

One main concern for Arizona, though, is its porous defensive line. They are ranked second-to-last in the Pac-12 when it comes to rushing defense, surrendering an average of 192.33 yards per game on the ground this season. That will be music to the ears of the Ducks’ running backs CJ Verdell and Travis Dye, who are poised to have a huge game against Arizona.

Verdell was sensational in Oregon’s win over Ohio State, rushing for 161 yards and a couple of touchdowns. He also was a threat through the air in that contest, nabbing 34 yards receiving and a score.

On Saturday, Oregon climbed up to No. 3 in the Associated Press Top 25 poll after crushing Stony Brook, 48-7. This is the highest ranking of the Ducks since 2014. Safety Verone McKinley stole the show for the Ducks on the defensive end, clinching a pair of interceptions against Stony Brook. He leads the Pac-12 with three picks thus far this year.

The Ducks will fancy their chances in this contest as they have fared extremely well at home of late. Oregon has won each of its last 14 games at the Autzen Stadium. The Wildcats, for that matter, have not won on the road in Eugene since 2014. That victory was also the last time the Wildcats have beaten a ranked team on the road, with Arizona upsetting No. 2 Oregon that year.

Oregon wins and covers the spread.