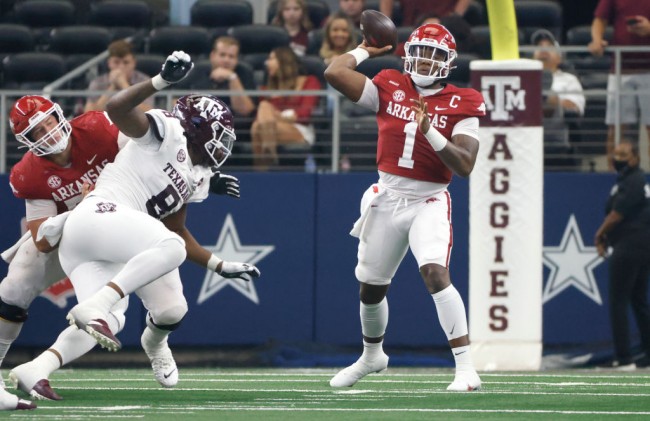 ARLINGTON, TX – KJ Jefferson (#1) of the Arkansas Razorbacks throws downfield against the Texas A&M Aggies in the first half of the Southwest Classic at the AT&T Stadium on September 25, 2021 in Arlington, Texas. (Photo : Ron Jenkins/Getty Images)

The Georgia Bulldogs and the Arkansas Razorbacks will put their unbeaten records on the line when they square off in a mouth-watering SEC showdown at the Sanford Stadium this coming Saturday. Which team will emerge with a perfect 5-0 record in this Arkansas vs Georgia clash?

There is just no stopping Arkansas right now. The Razorbacks recorded one of the upsets of the season thus far, stunning the Aggies on Saturday to keep their unbeaten record intact. In the Southwest Classic, Arkansas defeated Texas A&M, 20-10, to record its first win in the series in their 10 seasons since becoming foes in the SEC.

Arkansas’ monumental upset was duly rewarded as the Razorbacks jumped to No. 8 in the AP Top 25 poll ahead of Week 5. Powering Arkansas’ ascent to the top 10 in the college football rankings has been its tremendous defense.

The Razorbacks are holding their breath, though, regarding KJ Jefferson’s availability for Saturday’s crunch clash with Georgia. Jefferson suffered a knee injury in the win against Texas A&M. He has been an integral part of Arkansas’ passing game, averaging 18.3 yards per completion this year.

He threw for 202 yards and two touchdowns before getting hurt against Texas A&M. Losing Jefferson would be problematic against a Georgia side that leads the nation in several defensive categories, including scoring defense, rushing defense, passing defense, and total defense.

On Saturday, the Georgia Bulldogs will head to their SEC showdown with Arkansas with momentum on their side after destroying Vanderbilt, 62-0. It was another dominant victory for the Bulldogs, who remained undefeated through their first four assignments. They have won their first four outings by an average of 36.3 points.

The key to Georgia’s scorching start has been its superb offense. The Bulldogs are averaging 42.0 points per game this season, 12th in the entire FBS. Georgia dominated Vanderbilt in every facet of the game, including a 532-77 advantage in the total yards department.

The Bulldogs did most of their damage in the opening quarter, outscoring the Commodores, 35-0 during that period. JT Daniels only saw action in that first quarter, throwing for 121 yards and a couple of touchdowns.

However, there’s some injury concern with Daniels, who is dealing with a lat muscle injury ahead of Georgia’s showdown against Arkansas. He has been a vital cog in the Bulldogs offense, with Daniels currently ranked eighth in the FBS in total QBR (87.6).

Head coach Kirby Smart expects Daniels to start against the Razorbacks; however, during Wednesday’s teleconference, he told reporters that Georgia’s starting quarterback had done a good job getting his reps in practice.

10 Ways to Keep Your Cryptocurrency Safe from Online Frauds