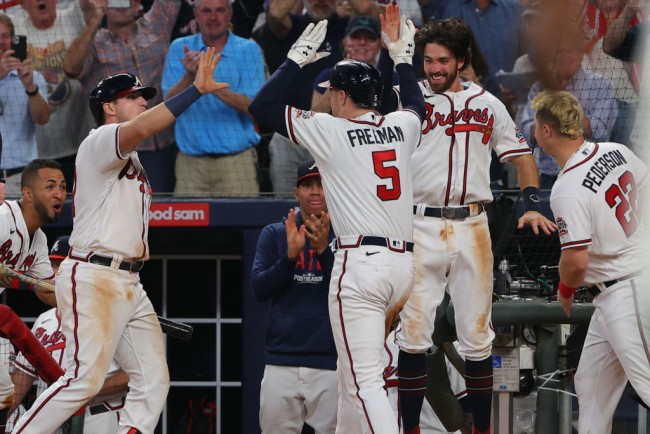 ATLANTA, GEORGIA – Freddie Freeman (#5) of the Atlanta Braves high fives Austin Riley (#27) and Dansby Swanson (#7) after hitting a home run during the eighth inning against the Milwaukee Brewers in game four of the National League Division Series at the Truist Park on October 12, 2021 in Atlanta, Georgia. (Photo : Kevin C. Cox/Getty Images)

The Atlanta Braves advanced to the National League Championship Series after beating the Milwaukee Brewers, 5-4, in Game 4 of the National League Division Series at the Truist Park. It was a heart-stopping victory for the Braves, who will next face either the San Francisco Giants or the Los Angeles Dodgers in the NLCS.

Freddie Freeman starred for the Braves in the series clincher, hitting a two-out, first-pitch home run in the bottom of the eighth inning off Brewers’ All-Star closer Josh Hader to give Atlanta the dramatic win on Tuesday.

Freeman takes Hader deep to send Atlanta to the NLCS

What made Freeman’s heroics so impressive was that it came at the expense of Hader, who is one of the most dominant relief pitchers in the majors right now. Before Freeman’s late-inning blast, Hader had never allowed a dinger in his postseason career. Such was Hader’s dominance that he had not allowed a single run since July 28.

That scoreless streak came to a shocking end in Game 4, with Freeman delivering the fatal blow to Hader and the Brewers. Freeman’s homer was the ninth run scored in Game 4 by both teams, matching the total scoring output of the Brewers and the Braves in the first three games of this series.

The Brewers opened the scoring in the top of the fourth inning, courtesy of RBI hits by Omar Narvaez and Lorenzo Cain. The Braves answered right back, though, with Eddie Rosario delivering a two-out, two-run single in the bottom half of the fourth inning.

Milwaukee responded quickly in the top of the fifth, regaining the advantage with a massive two-run blast by Game 1 hero Rowdy Tellez. Atlanta equalized in the bottom half of the fifth inning, with Joc Pederson and Travis d’Arnaud driving in the runs. That set the stage for the late drama, with the Braves clinching a spot in the NLCS for the second consecutive year.

The Braves will have to wait for their next opponents, though, as the Division Series between the San Francisco Giants and the Los Angeles Dodgers is headed to a deciding fifth game. The Dodgers kept their title retention bid alive with a resounding 7-2 win over the Giants in Game 4 to even the series at two games apiece.

After getting shut out in Game 3, the Dodgers’ bats sprung back to life in Game 4, with Mookie Betts and Will Smith each hitting a homer. They drove in a combined total of five runs, providing enough offensive support for Walker Buehler, who was terrific on the mound for the Dodgers on short rest.

Game 5 will take place Thursday at Oracle Park with 9:07 PM ET as the start time. Logan Webb will start for the Giants in this winner-take-all contest against Julio Urias, who will take the mound for the Dodgers.