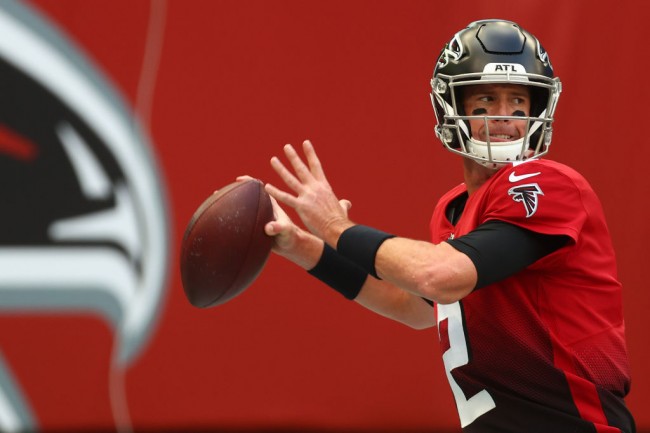 Fresh off their grueling trips to London, the Miami Dolphins and the Atlanta Falcons square off in Week 7 in a battle of struggling teams. Can Tua Tagovailoa help Miami end its five-game losing streak in the Falcons vs Dolphins showdown?

The Atlanta Falcons headed into their bye week feeling good about themselves after they defeated the New York Jets across the pond in London in Week 5. The Falcons pulled off a 27-20 victory over the Jets to improve their record to 2-3, 2.5 games behind leaders Tampa Bay Buccaneers in the NFC South standings.

Matt Ryan was again outstanding for the second game, completing 33 of 45 passes for 342 yards with two touchdowns and no interceptions against the Jets. He finally connected with highly touted rookie tight end Kyle Pitts, who caught nine passes for 119 yards and a score.

It is important for the Falcons that they start strong against the Dolphins in Week 7. The Falcons scored 17 unanswered points to start the game against the Jets, with that cushion helping them withstand a late rally by New York in the second half.

One advantage that Atlanta has over Miami in this matchup is that the Falcons are well-rested. The Falcons opted to use their bye week after their journey to London. The Dolphins decided not to go that route, opting to play again in Week 7 after their trip to England last weekend.

Tua Tagovailoa’s much-anticipated return to the starting lineup did not go according to plan for the Miami Dolphins as they absorbed their fifth consecutive defeat in their showdown against the Jacksonville Jaguars. Miami’s 23-20 loss to Jacksonville was a big disappointment for the Dolphins, given that the Jaguars had lost 20 games in a row before their matchup in London.

The Dolphins will need to forget that gut-wrenching loss quickly as they will return to action immediately against Atlanta in Week 7. Miami used this technique in 2017 with a favorable result, grabbing the win after coming home from London. The Indianapolis Colts also did this in 2016, winning the week after playing in England. However, it is a rare occurrence, with only five teams out of 60 playing the week after the London Games.

Tagovailoa is under pressure to deliver good performances soon for Miami, with reports surfacing that the Dolphins are interested in acquiring Houston Texans quarterback Deshaun Watson. Tagovailoa was shaky at times in the loss to Jacksonville, completing 33 of 47 passes for 329 yards with two touchdowns and one interception.

He had success connecting with Jaylen Waddle, who caught both of his touchdown passes. Tagovailoa and Waddle will look to dissect an Atlanta side that is second-worst in the NFL in scoring defense, allowing 29.6 points per game this season.

AI in the Telecommunication Market is Expected to Reach US$13.4 Million by 2026