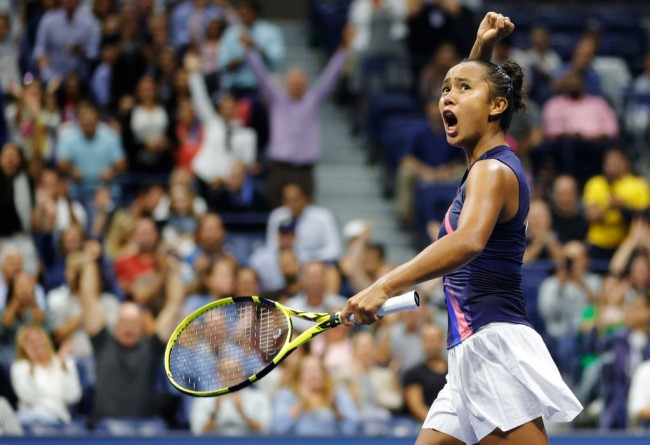 NEW YORK, NEW YORK – Leylah Annie Fernandez of Canada celebrates defeating Aryna Sabalenka of Belarus in the Women’s Singles semifinals on Day 11 of the 2021 US Open at the USTA Billie Jean King National Tennis Center on September 09, 2021 in the Flushing neighborhood of the Queens borough of New York City. (Photo : Sarah Stier/Getty Images)

The future has definitely arrived in New York, with Leylah Fernandez and Emma Raducanu booking their spots in the 2021 US Open women’s singles final. On Thursday, Fernandez and Raducanu produced contrasting victories at Arthur Ashe Stadium, setting the stage for the first major final between two teens since tennis legends Martina Hingis, 18, and Serena Williams, 17, squared off in the 1999 US Open final.

Fernandez was the first player to reach this year’s final, edging past world no. 2 Aryna Sabalenka in three tension-filled sets. Fernandez needed two hours and 24 minutes to pull off the 7-6 (3), 4-6, 6-4 victory.

The match could have yielded a much different result if Sabalenka had converted her huge advantage in the opening set. Sabalenka stormed out of the gates, winning 12 of the first 14 points contested to grab a 3-0 lead in the first set. The world no. 73 did not panic, though, saving a set point in the first set before taking it into a tie-breaker.

Fernandez managed to grit out the win in the tie-break, 7-3, which was no surprise given that she was 4-0 in tie-breaks in this year’s US Open before that. Sabalenka won’t go down easily, taking the match into a decider after grabbing the second set, 6-4.

However, the 19-year-old was on familiar ground with Fernandez winning tight three-setters in each of the previous four rounds. She showed tremendous composure down the stretch to pull off the win over Sabalenka and become the youngest player to beat three Top 5 players at a Grand Slam tournament since Serena Williams accomplished that feat during her championship run at the 1999 US Open.

Things are bound to get more challenging for Fernandez as standing in her way in the US Open final is the red-hot Emma Raducanu. The 18-year-old Brit is also breaking several records on the opposite side of the women’s draw, and she reached the final in style, crushing Maria Sakkari in straight sets, 6-1, 6-4.

She has now won all 18 sets she has played thus far in New York, winning three qualifying matches and now six main draw matches in straight sets. Raducanu started strongly against Sakkari, winning each of the first five games to take a 5-0 lead from the outset. Key to Raducanu’s fiery start was Sakkari’s inability to break the 18-yer-old’s serve, wasting seven break point opportunities during that period.

Sakkari finished the game with 33 unforced errors to hand the win to Raducanu, who became the youngest Slam finalist since Maria Sharapova captured the Wimbledon Championships at age 17 back in 2004. She also became the first qualifier in the professional era to reach a Grand Slam final with her win over Sakkari.

Leicester City star open to everything amid Manchester United interest