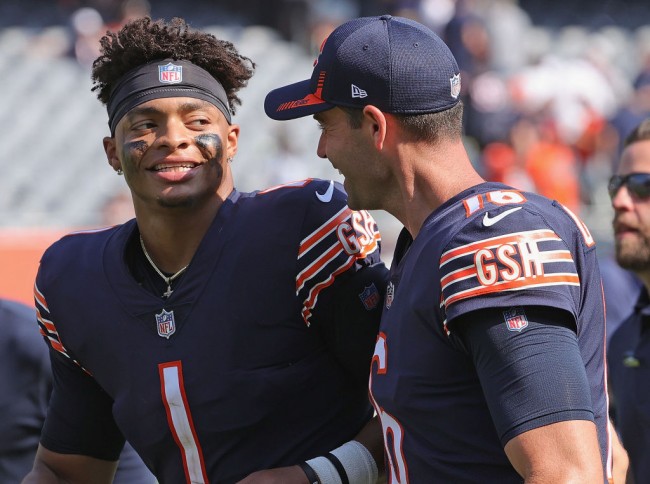 CHICAGO, ILLINOIS – Justin Fields (#1) of the Chicago Bears smiles at Pat O’Donnell (#16) as they leave the field following a win over the Cincinnati Bengals at the Soldier Field on September 19, 2021 in Chicago, Illinois. The Bears defeated the Bengals 20-17. (Photo : Jonathan Daniel/Getty Images)

The Chicago Bears and Cleveland Browns have injury concerns regarding their quarterbacks heading into their Week 3 matchup this coming Sunday. Baker Mayfield injured his left shoulder in the win against the Texans, while Andy Dalton suffered a knee injury against the Bengals. Mayfield managed to return, however, setting the stage for a possible showdown with Justin Fields in the Bears vs Browns game.

The Chicago Bears will head to their showdown with Cleveland with momentum on their side after eking past the Cincinnati Bengals, 20-17, on Sunday. Chicago’s much-maligned defensive unit showed up big time against Cincinnati, leading the Bears to their first win of the season.

The Bears recorded four consecutive takeaways in the second half, including three costly interceptions on consecutive pass attempts from Bengals quarterback Joe Burrow that swung the game in Chicago’s favor.

One of those resulted in a pick-six with Roquan Smith returning an interception 53 yards to score his first career touchdown. The Bears scored 13 points off those four turnovers, more than half their total scoring output in this game.

The main question heading into Week 3 is who will be the Bears’ starting quarterback against the Browns? Justin Fields played the entire second half against the Bengals after Andy Dalton injured his knee on a 14-yard run early in the second period.

However, Fields had a shaky outing, completing just 6 of 13 passes for 60 yards with an interception. He recorded 31 yards rushing as well, including a pivotal 10-yard run on 3rd and 9 at their 36-yard line in the closing minutes that helped seal the 20-17 win for Chicago.

Dalton was solid in his short stint in the first half. He completed 9 of 11 passes for 56 yards and a touchdown to Allen Robinson.

The Cleveland Browns finally recorded their first win of the season on Sunday after beating the Houston Texans, 31-21. Despite suffering a left shoulder injury, Baker Mayfield starred in this contest, completing 19 of 21 passes for 213 yards and a touchdown with one interception.

Mayfield’s injury happened during the second quarter after he threw a pick to Houston’s Justin Reid. He dislocated his left shoulder while attempting to tackle Reid after his interception. Mayfield is tough as nails, though, and returned to the game once his left shoulder got sorted out.

No. 6️⃣ is in for 6️⃣. @bakermayfield #Browns

Upon his return, he showed no signs of the injury, completing all 10 of his passes with a touchdown and running for a score. Nick Chubb provided the support on the ground, rushing for 95 yards on 11 carries, including a 26-yard touchdown run.

In an interview after the game, Browns coach Kevin Stefanski admitted that Mayfield is sore because of the injury, but he gutted it out. Mayfield has yet to miss a game because of injury in his NFL career, so it will be a major shock if he fails to suit up for the Browns in their Week 3 clash against the Bears.

The good news for Bears fans is that Mayfield’s injury happened to his non-throwing shoulder. That being said, if Mayfield’s injury forces him to miss time, the Browns will probably turn to Case Keenum as their starting quarterback for Week 3.

Browns win and cover the spread.