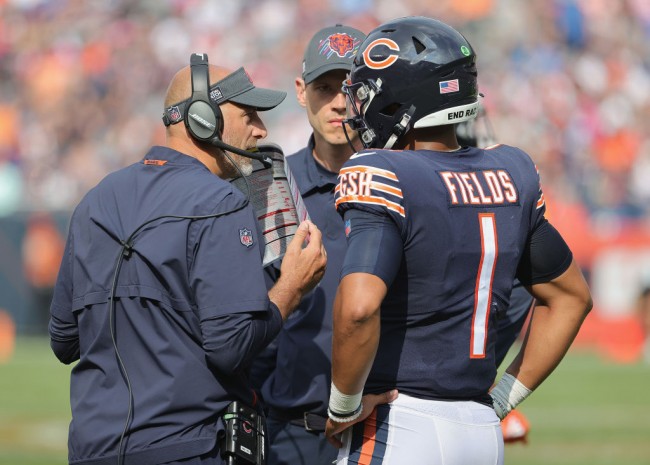 CHICAGO, ILLINOIS – Head coach Matt Nagy of the Chicago Bears (L) talks with Justin Fields (#1) during a game against the Detroit Lions at Soldier Field on October 03, 2021 in Chicago, Illinois. The Bears defeated the Lions 24-14. (Photo : Jonathan Daniel/Getty Images)

Justin Fields bounced back from his poor performance against the Cleveland Browns in Week 3, leading the Chicago Bears to a 10-point win over the Detroit Lions on Sunday. Can the rookie quarterback make it two wins in a row in the Bears vs Raiders showdown, or will Vegas send Chicago back below .500 again?

The Chicago Bears returned to their winning ways Sunday with a 24-14 victory over the Detroit Lions at the Soldier Field. It was a big bounce-back win for the Bears, who suffered a humiliating 26-6 loss against the Cleveland Browns in Week 3. With their win against the Lions, the Bears improved their season record to 2-2.

However, the victory came at a huge price as the Bears lost running back David Montgomery. He sprained his left knee on a short 5-yard run during the fourth quarter of their Week 4 win. Montgomery immediately clutched his knee as he stayed on the ground, with the starting RB helped off the field after the injury.

The good news regarding Montgomery’s injury is that it is not season-ending, with the 24-year-old set to miss just four to five weeks of action. That said, the Bears will still sorely miss his impact on the ground in the next month.

He has been a beast for the Bears this season, leading the team with 309 rushing yards and three scores. Montgomery was wreaking havoc against the Lions’ defensive line before his injury, racking up 106 yards rushing and two touchdowns.

To make matters worse for the Bears, Montgomery’s primary backup, Damien Williams, also suffered an injury against the Lions. He picked up a thigh bruise in Week 4, with Bears coach Matt Nagy yet to update his availability for the game against the Raiders.

The Las Vegas Raiders tasted defeat for the first time this season, losing 28-14 to AFC West rivals Los Angeles Chargers on Monday Night Football. With the loss, the Raiders are now locked in a 3-way tie for first place in the division with the Chargers and the Denver Broncos.

They will look to get their season back on track when they take on the Chicago Bears this coming Sunday. For the Raiders to record the much-needed victory, they will need to execute much better on the offensive side of the ball.

Derek Carr struggled mightily against the Chargers, completing just 21 of 34 passes for 196 yards with two touchdowns and one interception. He looked out of sorts in the first half, with the Raiders recording just 51 total yards and only one first down during that period.

Use of Virtual Reality in Horror Films