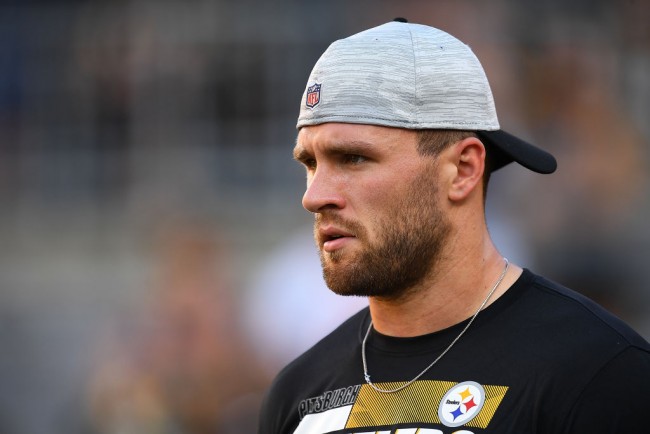 PITTSBURGH, PA – T.J. Watt of the Pittsburgh Steelers looks on prior to the game against the Detroit Lions at the Heinz Field on August 21, 2021 in Pittsburgh, Pennsylvania. (Photo : Joe Sargent/Getty Images)

T.J. Watt’s status for the Pittsburgh Steelers Week 1 clash against the Buffalo Bills remains uncertain as contract negotiations between the two parties continue to be the talk of the town just a few days before the start of the season. Steelers quarterback Ben Roethlisberger waded into the issue Wednesday morning, telling Pittsburgh’s top brass to pay Watt now.

Roethlisberger said, “I think T.J. should get whatever the heck he wants. He’s arguably the best football player in the game right now, not just on defense, just in general.” Roethlisberger later added that one of the reasons he took less money this season was for guys like Watt to get paid.

Roethlisberger believes Watt deserves every penny that he is asking from the Steelers and that he should get whatever he wants. Roethlisberger has every reason to feel frustrated as Watt is the Steelers’ most important player on the defensive end. The 39-year-old knows he has a few chances left to add to his two Super Bowl titles, and the Steelers can ill afford to start this season without Watt.

To refresh everyone’s memory, Roethlisberger signed a new contract back in March and willingly reduced his salary by $5 million to free up around $15 million in cap space for the 2021 season. Roethlisberger thought the money saved there would go to Watt, but the Steelers are standing their ground in the contract negotiations.

Watt is trying to change that line of thinking, seeking more up-front guarantees from the Steelers for his new deal. Watt’s importance to the Steelers franchise gives him the power and the right to demand more money from Pittsburgh.

He has been the runner-up for NFL Defensive Player of the Year the past two seasons, with Watt leading the league in sacks in 2020 with 15, pushing his tally over his first four years with Pittsburgh to 49.5 sacks.

Head coach Mike Tomlin remains confident that his star defensive player will suit up this coming Sunday against Buffalo, as Watt practiced in full with the team for the first time this season on Wednesday.

Tomlin gave a glowing assessment of Watt’s first full practice with the team, telling Joe Rutter of the Pittsburgh Tribune-Review, “I thought he looked good. He was engaged. He has been full participant in walk-throughs.”

We’ll find out soon enough whether the Steelers can sort out this contract mess and line up against a strong Bills team with Watt leading their defense.

Everything You Must Know About Unhackable Quantum Internet