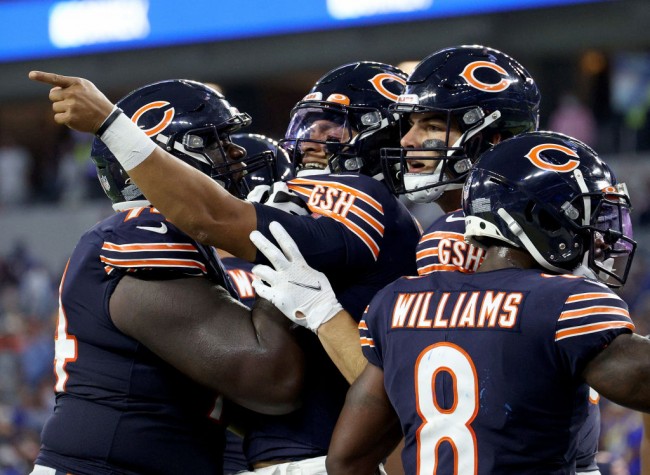 INGLEWOOD, CALIFORNIA – Justin Fields (#1) of the Chicago Bears celebrates his touchdown with Germain Ifedi (#74) and Cole Kmet (#85) to trail 20-14 during a 34-14 loss to the Los Angeles Rams at the SoFi Stadium on September 12, 2021 in Inglewood, California. (Photo : Harry How/Getty Images)

Joe Burrow couldn’t have scripted a much better return to the NFL after leading Cincinnati to a critical overtime victory over Minnesota in Week 1. This coming Sunday, the Bengals now set their sights on a possible 2-0 start when they face the still winless Chicago Bears at the Soldier Field. Here’s our preview of the Bengals vs Bears game.

The pressure is mounting on coach Matt Nagy to give the starting quarterback duties to Justin Fields after the Chicago Bears suffered a humiliating 34-14 loss to the Los Angeles Rams in Week 1.

The Bears’ rookie quarterback played just five snaps in his NFL debut but did provide a glimpse of his incredible talent, completing all of his two passes for 10 yards and adding a 3-yard rushing touchdown in the loss to the Rams.

That wasn’t enough for Fields to earn the starting job for the Bears, with Nagy adamant that Dalton is still Chicago’s QB in Week 2. He completed 27 of 38 passes for 206 yards with no touchdowns and one interception against Los Angeles.

Dalton’s night could have ended much better if he led the Bears to a score in his opening drive, but he wasted the red zone opportunity by throwing an interception in the end zone. What made that pick so much worse in the eyes of Bears fans is that it came just two plays after Fields threw a 9-yard beauty to Marquise Goodwin with Aaron Donald near his face.

Nagy might be afraid to throw Fields into the deep end, considering the growing injury concerns of Chicago’s putrid offensive line. The Bears might be down to their third-string left tackle for Week 2 after Jason Peters and Larry Borom were injured against Los Angeles.

Joe Burrow made a triumphant return to the NFL after a horrific ACL injury last season, leading the Cincinnati Bengals to a thrilling 27-24 overtime win over the Minnesota Vikings. He completed 20 of 27 passes for 261 yards and two touchdowns in the Week 1 victory.

Burrow’s actions in overtime saved the day for Cincinnati, with the former LSU quarterback revealing in an interview with Dan Patrick that he decided to change the Bengals’ play on 4th and 1 with 32 seconds remaining after seeing the Vikings’ defensive formation.

Instead of running the football, Burrow went the aerial route, throwing a 32-yard pass to C.J. Uzomah that helped set up Cincinnati’s game-winning field goal. Bengals fans will be delighted not only with Burrow’s growing maturity but also his burgeoning partnership with former LSU teammate Ja’Marr Chase, who caught five passes for 101 yards and a touchdown on Sunday.

Burrow and co. will be licking their chops at the prospect of facing a Bears defense that surrendered 34 points and 312 passing yards in the one-sided loss to the Rams.

Bears get their first win of the season against Cincinnati.

Most Stunning Quantum Experiments that Will Definitely Excite You

How CIOs Can Get the Most ROI From Digital Transformation Budgets