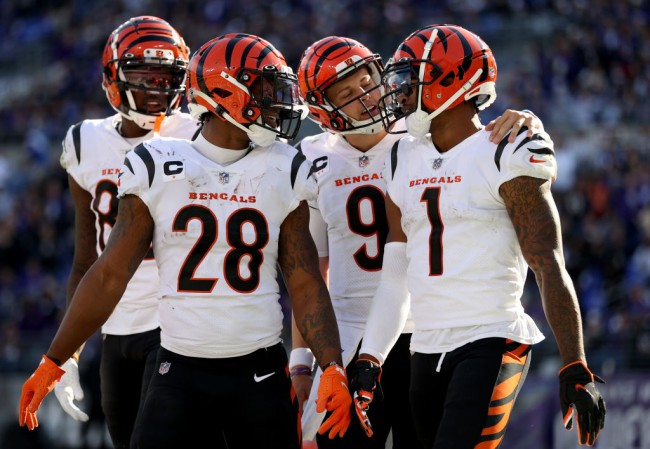 BALTIMORE, MARYLAND – Ja’Marr Chase (#1) of the Cincinnati Bengals celebrates a touchdown with Joe Burrow (#9) and Joe Mixon (#28) during the second half in the game against the Baltimore Ravens at the M&T Bank Stadium on October 24, 2021 in Baltimore, Maryland. (Photo : Rob Carr/Getty Images)

The Cincinnati Bengals delivered a huge statement win in Week 7, crushing the Baltimore Ravens on the road to take the top spot in the AFC. The Bengals will look to sustain the momentum of that huge win when they lock horns with the reeling New York Jets at the MetLife Stadium. Can Cincinnati cover the spread in this Bengals vs Jets clash?

The Cincinnati Bengals are legit. They sent shockwaves across the league in Week 8 after destroying the Baltimore Ravens, 41-17, at the M&T Bank Stadium. It was a critical victory for the Bengals, who are now tied with the Ravens for first place in the AFC North. Both teams carry similar 5-2 records, with Cincinnati holding the tiebreaker edge over Baltimore at this stage.

Joe Burrow and Ja’Marr Chase stole the show for the Bengals, with the former LSU teammates punishing the Ravens secondary all afternoon long with their outstanding play. Burrow completed 23 of 38 passes for a career-high 416 yards and three touchdowns.

Joe Burrow was right about Ja’Marr Chase all along.

Burrow to Chase is pure 💰pic.twitter.com/IiANdtsyHa

Chase was Burrow’s favorite target, with the rookie wide receiver catching eight passes for 201 yards, including an 82-yard touchdown reception in the third quarter that swung the momentum in Cincinnati’s favor. Chase made history with that performance as he broke Speedy Thomas’ franchise rookie record of 177 receiving yards set in 1969.

Burrow and Chase will look to dissect a Jets secondary that surrendered 403 passing yards in their loss to the Patriots.

The New York Jets are once again the laughingstock of the NFL after they absorbed a humiliating 54-13 defeat at the hands of the New England Patriots in Week 8. It was the first time since 1995 that the Jets allowed more than 50 points in a game.

Robert Saleh was brought in this season to help improve the Jets’ defense. That improvement is nowhere to be seen with the Jets surrendering an average of 477 total yards in their last three games. The Jets allowed 551 total yards in the loss to New England, the most they have conceded since their season opener against the San Francisco 49ers in 1998.

The Jets also have struggled on the offensive side of the ball, especially at the start of games. The Jets have been outscored 44-0 in the first quarter and 106-20 in the opening half of the seven games they have played thus far.

To make matters worse for New York, they will be without rookie quarterback Zach Wilson for the next two to four weeks after he sprained the PCL in his right knee in the loss to the Pats. Wilson, whose right knee got twisted on a hit by linebacker Matthew Judon, completed 6 of 10 passes for 51 yards before his exit.

With Wilson sidelined, the Jets bolstered their quarterback ranks by acquiring veteran Joe Flacco in a trade. It will be interesting to see who between Flacco and Mike White will get the start against Cincinnati. White threw for 202 yards and a touchdown with two interceptions in the Week 7 loss.

Importance of Cryptocurrency in Growth of Indian FinTech Industry