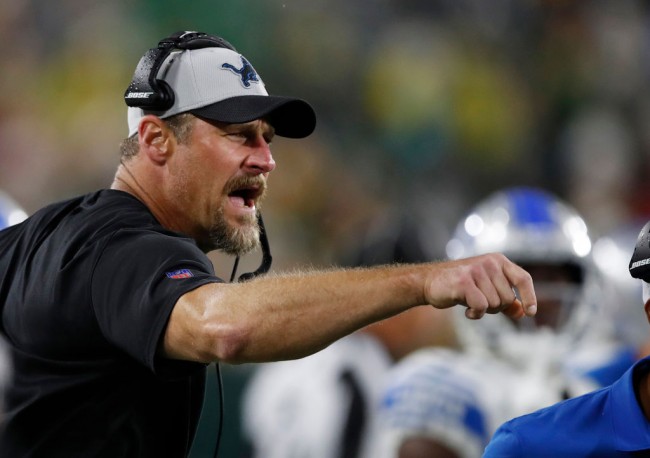 GREEN BAY, WISCONSIN – Head coach Dan Campbell of the Detroit Lions reacts against the Green Bay Packers during the second half at the Lambeau Field on September 20, 2021 in Green Bay, Wisconsin. (Photo : Wesley Hitt/Getty Images)

Dan Campbell has had a horrible start to his career as head coach of Detroit, losing each of his first five games with the Lions. Can he stop the rut in Week 6 and record his first win against Cincinnati in the Bengals vs Lions showdown?

The Cincinnati Bengals had their two-game winning streak snapped on Sunday with a gut-wrenching 25-22 overtime loss to the Green Bay Packers. Evan McPherson had two opportunities to seal the win for Cincinnati, but unfortunately, he missed both his field goal attempts at the end of regulation and overtime.

During overtime, Green Bay took full advantage of those wasted chances, with Mason Crosby knocking in the game-winning 49-yard field goal. The loss proved to be costly for the Bengals as they dropped out of first place in the AFC North for the first time this season. They now trail the Baltimore Ravens by one game with their 3-2 record.

To make matters worse for the Bengals, star quarterback Joe Burrow suffered a throat contusion in that loss to the Packers. He went to the hospital for a precautionary visit and had been advised by the Bengals’ medical staff to speak as little as possible ahead of Sunday’s game with the Lions.

The good news for Bengals fans is that Burrow is expected to play in that Week 6 clash. He played every game for Cincinnati this year after a knee injury forced him to miss the final six games of his rookie campaign last season. Burrow had been sensational for the Bengals to start the 2021 season, completing 71.7 percent of his passes for 1,269 yards with 11 touchdowns and six interceptions.

Dan Campbell was again denied his first win as Detroit head coach after the Lions suffered a gut-wrenching 19-17 loss to the Minnesota Vikings on Sunday. Greg Joseph successfully converted a 54-yard field goal attempt as time expired to hand the Lions their fifth defeat of the season.

The Lions looked to be on their way to a famous win after producing sensational plays both on the offensive and defensive ends in the game’s closing stages. Trailing 16-9 and with no timeouts remaining, the Lions were given a lifeline by Minnesota after Alexander Mattison fumbled the football on a 3rd-and-7 run, giving the possession back to Detroit with just two minutes left in the game.

Detroit took full advantage of that miscue, scoring a touchdown and the ensuing two-point conversion with just 37 seconds remaining in the game clock to grab a shock 17-16 advantage over Minnesota. However, the Vikings pulled off a great escape, with Kirk Cousins leading Minnesota to field goal position to set up Joseph’s late heroics.

#Lions score with Swift and then got the two-point play to take a 17-16 lead.

Apart from losses, injuries also have been piling up for the Lions lately. Center Frank Ragnow is the latest Lion to be ruled out for the remainder of the season after undergoing toe surgery for an injury he suffered against the Bears in Week 4.