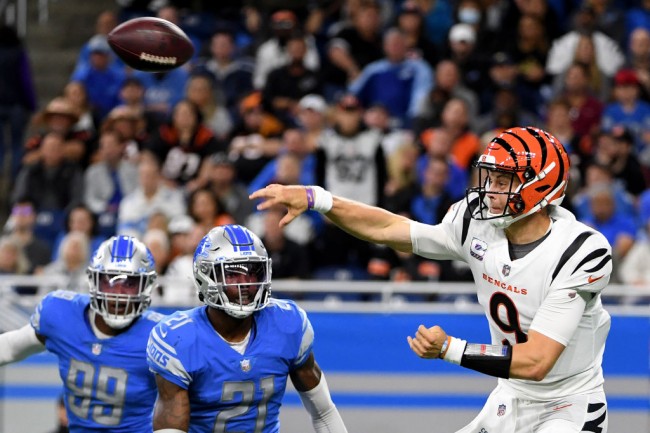 DETROIT, MICHIGAN – Joe Burrow (#9) of the Cincinnati Bengals throws a pass against the Detroit Lions during the first quarter at Ford Field on October 17, 2021 in Detroit, Michigan. (Photo : Nic Antaya/Getty Images)

AFC North supremacy will be at stake in Week 7 as the Baltimore Ravens host the Cincinnati Bengals in a critical showdown at the M&T Bank Stadium. Can Lamar Jackson continue his scorching start in this Ravens vs Bills clash, or will Joe Burrow make a name for himself in this divisional matchup?

The Cincinnati Bengals returned to the win column in Week 6, thrashing the Detroit Lions on the road to keep pace with Baltimore in the AFC North. They remain one game behind the Ravens heading into their crunch showdown in Baltimore in Week 7.

For the Bengals to record the upset win in that matchup and grab a share of the division lead with the Ravens, they will need Joe Burrow to continue his outstanding play. He was superb in the 34-11 win against the Lions, completing 19 of 29 passes for 271 yards.

Burrow showed no ill effects of the throat contusion he suffered in the heartbreaking overtime loss to the Green Bay Packers, tying a career-high with three touchdown passes against Detroit. Burrow has formed quite a connection with his long-time teammate Ja’Marr Chase, who is on pace to become the Bengals’ first 1,500-yard rusher or receiver.

Chase caught four passes for 97 yards and made a stunning play on Joe Mixon’s touchdown, sprinting up the field to make a block near the end zone to clear some space for the Bengals running back. Mixon accounted for 153 total yards in the win against the Lions, 94 of which came on the ground.

The Baltimore Ravens grabbed sole possession of the first place in the AFC after crushing the Los Angeles Chargers, 34-6, in a battle of division leaders in Week 6. The Ravens’ 28-point demolition of Los Angeles was their largest margin of victory over a team with a winning percentage of over .800 in franchise history.

What made the rout even more impressive for the Ravens was that they did it without Jackson producing stellar numbers. He struggled in the game against the Chargers, throwing for a season-low 167 yards and two interceptions for his least productive game of the season.

However, the Ravens still grabbed the victory with the help of their outstanding defense and ground game. Baltimore punished the Chargers’ defensive line all afternoon long, running for 187 yards. The Ravens also managed to limit the red-hot Justin Herbert to a season-low 195 passing yards.

The #Ravens are running all over the #Chargers league worst rush defense.

Touchdown Murray for the lead.pic.twitter.com/fK0vc1Ptmj

With the win, the Ravens improved to 5-1 for the second consecutive season and for the fourth time in the franchise’s history. Being in this position has benefited Baltimore in the past, with the Ravens’ 2000 and 2012 Super Bowl-winning teams also starting their respective seasons 5-1.

Invest in These Top 10 Cryptocurrency Prices on October 22, 2021