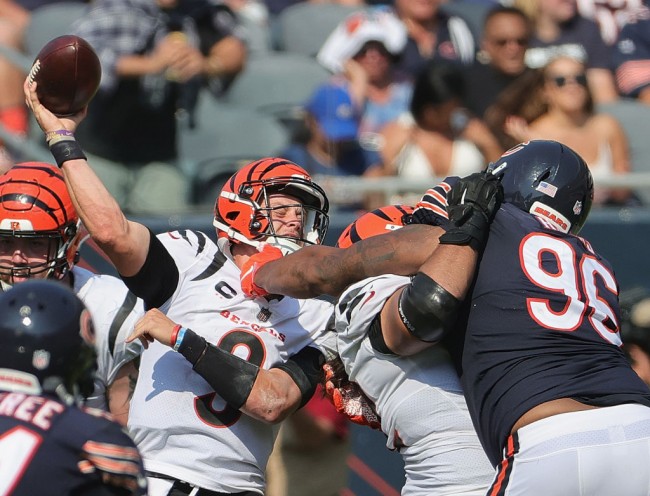 CHICAGO, ILLINOIS – Joe Burrow (#9) of the Cincinnati Bengals tries off a pass as he’s hit by Akiem Hicks (#96) of the Chicago Bears at the Soldier Field on September 19, 2021 in Chicago, Illinois. The Bears defeated the Bengals 20-17. (Photo : Jonathan Daniel/Getty Images)

A blockbuster AFC North showdown will be coming our way in Week 3 as the Cincinnati Bengals travel to Pittsburgh to face the vaunted Steelers. Read our preview of the Bengals vs Steelers matchup to see who has the advantage in this divisional clash.

It is back to the drawing board for Joe Burrow and the Cincinnati Bengals after they suffered a 20-17 loss to the Chicago Bears Sunday. Burrow capitulated against the Bears’ defense, throwing three consecutive interceptions to hand Chicago the victory.

Burrow’s errant throws were unexpected, given that he entered the Week 2 clash as one of the best ball protectors in the NFL, having thrown 199 consecutive passes without an interception. The Bears ended that streak with Roquan Smith intercepting Burrow’s pass at Chicago’s 46-yard line before returning it 54 yards for his first career touchdown.

Joe Burrow tried to tackle him on the goal line.

Burrow’s woes continued the following possession, with his pass attempt to Tee Higgins finding Bears cornerback Jaylon Johnson instead. Defensive lineman Angelo Blackson made it a hat trick of interceptions when he stole Burrow’s next pass. The Bengals lost the game during that stretch, with Chicago scoring 10 points off those picks.

Burrow, who completed 19 of 30 passes for 207 yards with two touchdowns against the Bears, will look to bounce back this coming Sunday against the Pittsburgh Steelers. He will fancy his chances against a Steelers secondary that is fourth-worst in the NFL in passing defense, allowing 313.5 yards per game through the air this season.

The Pittsburgh Steelers have some major injury concerns heading into their Week 3 clash with the Cincinnati Bengals. Defensive tackle Tyson Alualu may be done for the 2021 season after suffering a fractured ankle in their loss to the Las Vegas Raiders. Alualu’s injury is a big blow to a Steelers side that is already without Stephon Tuitt, who is currently sidelined with a knee injury.

To make matters worse for Pittsburgh, the trio of Devin Bush, Joe Haden, and T.J. Watt may also miss the Week 3 game against the Bengals, with all of them picking up groin injuries. Linebacker Bush and cornerback Haden were surprise inactives for the game against the Raiders while Watt left that contest early and didn’t play the entire second half.

The good news for Pittsburgh is that Watt’s groin injury isn’t serious and that the Steelers aren’t ruling him out for the game against Cincinnati. He was limited to just 16 snaps against Las Vegas, picking up four tackles, a sack, and a forced fumble during his short stint in the first half.

If Watt fails to recover in time for Sunday’s game against the Bengals, the Steelers will rely on Alex Highsmith and Melvin Ingram to get the bulk of the playing time as the team’s edge rushers. Highsmith played 67 percent of the snaps in Week 2, while Ingram’s snap rate bumped up to 86 percent (from 64 percent in Week 1).

Pittsburgh wins and covers the spread.