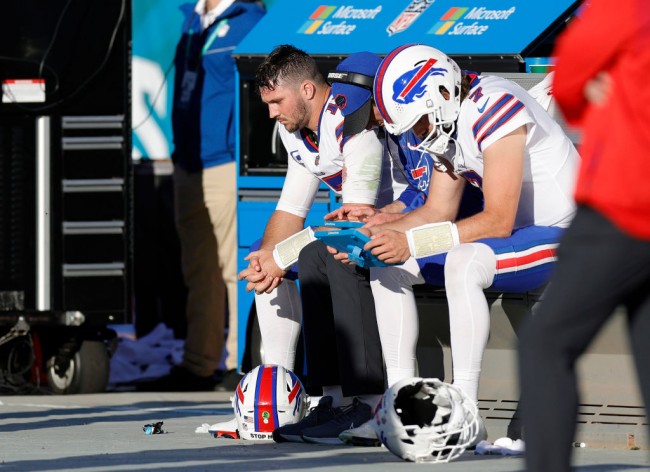 JACKSONVILLE, FLORIDA – NOVEMBER 07: Josh Allen #17 of the Buffalo Bills looks on during the fourth quarter in the game against the Jacksonville Jaguars at TIAA Bank Field on November 07, 2021 in Jacksonville, Florida. (Photo : Douglas P. DeFelice/Getty Images)

The Buffalo Bills have won three of their last four meetings with the New York Jets. Can Josh Allen extend Buffalo’s dominance against New York in this Bills vs Jets clash? Here’s a preview of this key divisional matchup.

Now that was a shock. The Buffalo Bills lost for the second time in three games, suffering a 9-6 defeat at the hands of the hapless Jacksonville Jaguars. Josh Allen struggled mightily in this contest, completing just 31 of 47 passes for 264 yards with no touchdowns and two interceptions.

Josh Allen the Jaguar proved to be the kryptonite of Josh Allen the Bill in this Week 9 clash. The Jaguars outside linebacker made history when he sacked the Bills quarterback in the second quarter as it was the first time in the NFL that a player sacked another player with the same name.

Allen continued to torment his namesake in the second half as he intercepted one of the Bills quarterback’s passes and also recovered his fumble. It was a successful afternoon for the Jaguars, who held the high-scoring Buffalo Bills to just a couple of field goals in a stunning upset. They put constant pressure on Allen, who was sacked four times.

For the Bills to return to the win column against the Jets, they will need to clean up their play and limit their penalties. The Bills had 12 penalties for 118 yards in the loss to the Jaguars.

The New York Jets came crashing back to earth on Thursday Night Football, losing 45-30 to the Indianapolis Colts. It was a demoralizing defeat for the Jets, who were coming off a thrilling 34-31 win over the Cincinnati Bengals in Week 8.

Mike White starred for the Jets in that come-from-behind victory against the Bengals and many were expecting him to serve an encore in his primetime debut against the Colts. His night started well, completing 7 of 11 passes for 95 yards and a touchdown.

Mike White discusses the frustrations with not getting to complete tonight’s game, and adds this injury “isn’t the end of the road by any means” pic.twitter.com/DlBFqSNVka

Unfortunately for White, his outing was short-lived as he suffered a right forearm injury while throwing the touchdown pass to Elijah Moore. The good news for the Jets is that White’s injury is not serious and that he is expected to return for their Week 10 showdown against the Bills.

The Jets may have a quarterback controversy in their hands, though, with Zach Wilson also nearing his return from a knee injury. Robert Saleh refused to close the door on White’s future as a Jets starter which is understandable given his excellent showing against the Bengals. He threw for 405 yards and three touchdowns in that contest.

One starter who will miss that game against the Bills is safety Marcus Maye, who suffered a season-ending Achilles tendon injury in Week 9.

Buffalo wins and covers the spread.

All You Need to Know About a Blockchain Quality Engineer