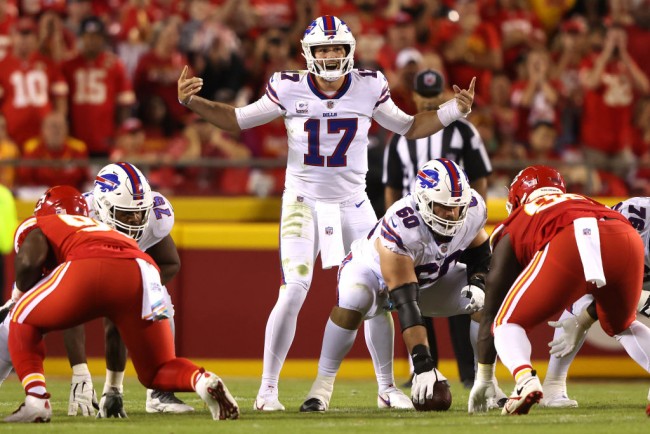 KANSAS CITY, MISSOURI – Josh Allen (#17) of the Buffalo Bills motions at the line of scrimmage during the first half of a game against the Kansas City Chiefs at the Arrowhead Stadium on October 10, 2021 in Kansas City, Missouri. (Photo : Jamie Squire/Getty Images)

A blockbuster showdown will be heading our way on Monday Night Football as the Buffalo Bills and the Tennessee Titans square off in a pivotal Week 6 clash. Both teams lead their respective divisions in the AFC, so expect a gripping matchup between these two playoff contenders. Here’s an in-depth preview of this Bills vs Titans clash.

The Buffalo Bills will head to their showdown against the Tennessee Titans with momentum on their side after crushing the Kansas City Chiefs, 38-20, on Sunday Night Football. It was another impressive win by the Bills, who now lead the AFC East standings by two games with their 4-1 record.

Like in their previous three victories against Miami, Washington, and Houston, Josh Allen was the architect for Buffalo’s win against Kansas City. He completed 15 of 26 passes for 315 yards with three touchdowns and no interceptions. Allen also punished the Chiefs on the ground, running for 59 yards and a score on 11 carries. Allen has accounted for 13 total touchdowns in the Bills’ last four games.

The Bills’ defense was also outstanding in the Week 5 win. They made Patrick Mahomes’ life difficult on Sunday, limiting him to just 272 passing yards and intercepting two of his passes. The Bills held the Chiefs to less than 400 total yards at Arrowhead Stadium and recorded four takeaways.

Tennessee solidified its hold of the top spot in the AFC South with an emphatic 37-19 victory over the still winless Jacksonville Jaguars in Week 5. Derrick Henry tormented Jacksonville again as the Titans handed the Jags their 20th consecutive defeat dating back to last season.

Henry went berserk on the ground, running for 130 yards and three touchdowns on 29 carries. He is the runaway leader in the rushing department in the NFL, recording 640 yards thus far through Tennessee’s first five games. That is 117 yards more than his nearest rival, Nick Chubb’s tally.

Henry made history in the win against Jacksonville as he became just the third player in the history of the Titans/Oilers franchise to rack up 60 rushing touchdowns. Henry joins in that exclusive list Earl Campbell (73) and Eddie George (64). Henry now has 62 rushing touchdowns in his NFL career, 14 of which have come against the Jags.

He will look to pile on more rushing touchdowns in Week 6 when the Titans face the Bills on Monday Night Football. However, Henry will have his work cut out for him in this matchup as the Bills are third in the NFL in rushing defense, allowing an average of just 78.4 yards per game on the ground this season.