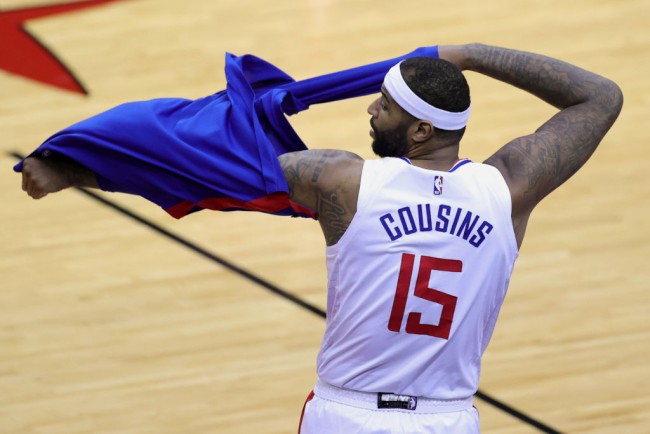 HOUSTON, TEXAS – DeMarcus Cousins #15 of the Los Angeles Clippers enters the game during the first quarter against the Houston Rockets at Toyota Center on April 23, 2021 in Houston, Texas. (Photo : Carmen Mandato/Getty Images)

The Milwaukee Bucks bolstered their frontcourt on Sunday, signing four-time All-Star center DeMarcus Cousins to a non-guaranteed deal. According to ESPN‘s Adrian Wojnarowski, the 31-year-old will be signing a one-year contract with the defending champions. The Bucks’ deadline for guaranteeing his contract for the remainder of the season is on January 7.

The Bucks decided to pull the trigger on the Cousins deal with their frontcourt lacking in depth at the moment. Brook Lopez, the team’s starting center, has not played for the Bucks since injuring his back on opening night against the Brooklyn Nets.

Head coach Mike Budenholzer and star player Giannis Antetokounmpo voiced their concerns about Milwaukee’s thin front line, telling reporters after their 18-point win over the Indiana Pacers on Sunday that the Bucks need to add a big man to their roster with Lopez still unavailable.

Antetokounmpo said, “Brook is a big part of what we do, can’t wait for him to get back healthy, but at the end of the day, without Brook, we don’t have another big.” Antetokounmpo then added that having another big man on the team would be nice as he feels he and Bobby Portis are carrying a heavy load with them being on the court all the time as the Bucks’ bigs.

Budenholzer echoed his franchise player’s sentiments, saying that frontcourt depth is something they could use right now, with the Bucks relying heavily on Giannis and Bobby as their two main bigs.

The Bucks heard their request and addressed that issue immediately by signing Cousins. He provides the Bucks with much-needed experience and depth to their frontcourt. More importantly for the Bucks, he can stretch the floor with his outside shooting like Lopez. Cousins also can create some baskets in the post area.

Bucks hoping Cousins can provide quality minutes off the bench

Cousins was one of the best big men of his generation, averaging 20.4 points and 10.6 rebounds during his 10-year NBA career. Unfortunately for Cousins, injuries derailed his once-promising career with the two-time All-NBA second-team selection suffering a torn ACL and Achilles tendon in recent years.

He failed to find a deal this past offseason after playing parts of last season with the Houston Rockets and the Los Angeles Clippers. Cousins showed he could still play at a high level when he was with the Clippers, averaging 7.8 points per game last season.

He shot 54 percent from the field during his time there, including 42 percent from beyond the arc. Cousins also had strong outings when the Clippers faced the Suns in the Western Conference Finals.

The Bucks hope Cousins can provide quality minutes off the bench as their backup center. It is a big break for Cousins, who is hoping this partnership will finally land him his first NBA championship.