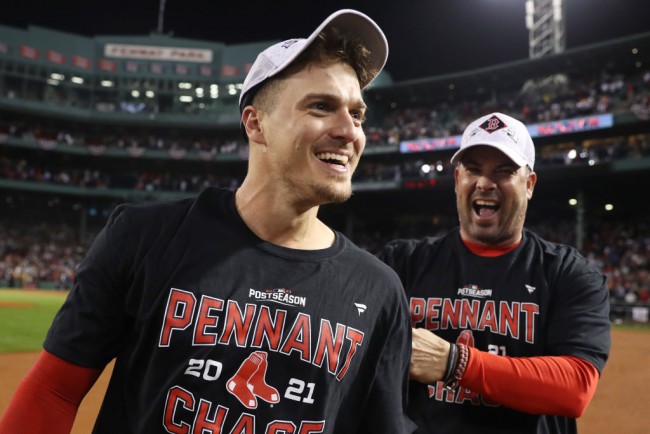 BOSTON, MASSACHUSETTS – Enrique Hernandez (#5) of the Boston Red Sox celebrates their 6 to 5 win over the Tampa Bay Rays during Game 4 of the American League Division Series at the Fenway Park on October 11, 2021 in Boston, Massachusetts. (Photo : Maddie Meyer/Getty Images)

The Boston Red Sox are moving on to the American League Championship Series after beating the Tampa Bay Rays, 6-5, in Game 4 of the American League Division Series at the Fenway Park. It was a heart-stopping win for the Red Sox, who will next face either the Houston Astros or Chicago White Sox in the ALCS.

KIKÉ HERNANDEZ SENDS THE RED SOX TO THE ALCS

Just like in Game 3, the Red Sox finished the series clincher in a walk-off fashion. Kike Hernandez was the hero for Boston this time around, hitting a walk-off sacrifice fly to left field to score Danny Santana in the bottom of the ninth inning.

Whitlock picks up the win for Boston in the series clincher

The victory would not be possible without the heroics of reliever Garrett Whitlock, who picked up the win for the Red Sox after pitching two scoreless frames in the eighth and ninth innings. Whitlock stopped the momentum of the Rays, who had equalized at the top of the eighth after scoring two runs off Ryan Brasier.

Whitlock had been a revelation for the Red Sox since arriving in Boston as a Rule 5 draft pick. Once discarded by the New York Yankees, Whitlock emerged as a key weapon for Boston’s bullpen, recording a 1.96 ERA with a 1.10 WHIP in 46 appearances for the Red Sox.

The Red Sox will still have to wait for their next opponent after the Game 4 showdown between the Chicago White Sox and the Houston Astros was postponed on Monday due to rain. The Astros lead the series, 2-1, with Game 4 now scheduled to take place on Tuesday at 2:07 p.m. ET.

Houston got a huge break with the postponement as the Astros will now send ace Lance McCullers Jr. to the mound for the pivotal Game 4. White Sox manager Tony La Russa refused to alter his rotation as he decided to stick with Carlos Rodon in the all-important clash. Lance Lynn will be available for the White Sox in the bullpen; however, Lucas Giolito will start for Chicago in Game 5 if the series extends to a decider.

Atlanta Braves, San Francisco Giants a victory away from NLCS

The Atlanta Braves and the San Francisco Giants moved to within a victory of reaching the National League Championship Series after winning Game 3 of their respective Division Series against the Milwaukee Brewers and the Los Angeles Dodgers.

Joc Pederson starred for the Braves in the Game 3 win against the Brewers, blasting a pinch-hit three-run homer in the fifth inning to give Atlanta the 3-0 victory and a 2-1 lead in the best-of-five series.

Evan Longoria scored the only run in the Game 3 showdown between the Dodgers and the Giants, hitting a solo homer off Max Scherzer in the top of the fifth inning for the 1-0 win. The Dodgers had an opportunity to send the game into extra innings, but Gavin Lux’s towering blast in the bottom of the ninth was knocked down by the wind, giving San Francisco the 2-1 series lead.

Know the Exciting Features in the Latest Python Version