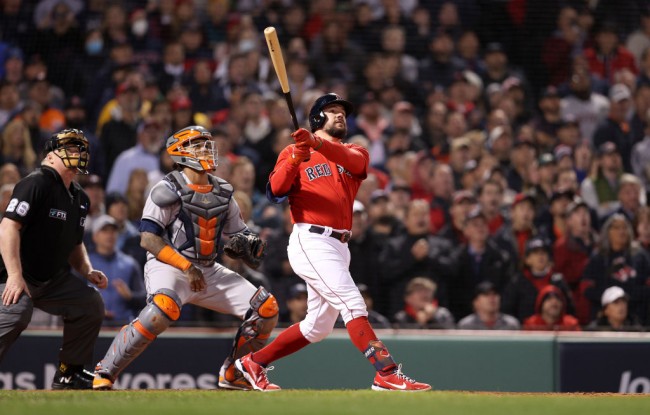 The Boston Red Sox moved to within two victories of reaching the World Series after winning Game 3 of the American League Championship Series in dominating fashion against the Houston Astros. Four different players hit home runs for the Red Sox, who grabbed a decisive 12-3 win and took a commanding 2-1 series lead over the Astros heading into Game 4.

Kyle Schwarber made history with one of those homers, blasting a grand slam in the bottom of the second inning that broke the game wide open. Schwarber’s grand slam not only gave Boston a 6-0 lead but also a place in the record books as the Red Sox became the first team in MLB history to record three slams in a single postseason series.

J.D. Martinez and Rafael Devers each hit grand slams in the first two innings of Game 2 to help Boston steal home-field advantage in the ALCS. Schwarber made sure the Red Sox protected that advantage in Game 3, hitting a 3-0 pitch into the right field grandstand at Fenway Park with the bases loaded, chasing Houston starter Jose Urquidy in the second inning.

The Red Sox offense was firing on all cylinders again, with Boston building a 9-0 lead for the second game running. The Red Sox finished the game with 11 hits in total, becoming the first team in the history of the majors to reach double digits in hits six consecutive times in a single postseason.

The Red Sox have now blasted 17 homers in their past six postseason games, the most ever over any six-game span in the playoffs. They have also scored 50 runs during that span, the most by any team in a six-game stretch in the postseason since the Red Sox themselves scored 52 runs over their final six games in their World Series-winning campaign in 2007.

On Monday, Martinez and Devers joined the hit parade, each recording a homer just like in Game 2. Christian Arroyo also blasted a dinger while Kiké Hernández continued his torrid hitting by racking up a couple of hits in Game 3. Hernandez now has 18 hits during the postseason and is batting an incredible .500 in this year’s playoffs, the best in the majors.

That run support was good enough for Red Sox starter Eduardo Rodriguez, who was superb for Boston in Game 3. He allowed just three runs on five hits in six innings of action with seven strikeouts to pick up his first win in the 2021 postseason.

Game 4 will take place Tuesday at Fenway Park with 8:08 PM ET as the start time. Nick Pivetta will start for the Boston Red Sox in this contest against Zack Greinke, who will take the mound for the Houston Astros.

Potential of Artificial Intelligence Replacing Animal Testing in the Future