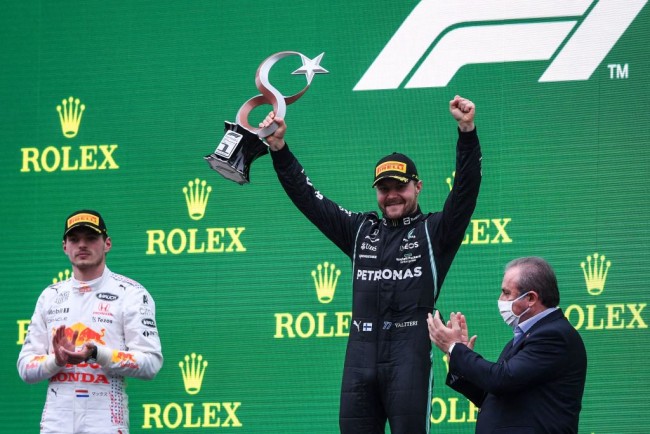 Max Verstappen’s quest for a maiden Formula One Driver’s Championship got a major boost on Sunday after recording a second-place showing at the 2021 Turkish Grand Prix. It was a critical podium finish for Verstappen, who regained the championship lead over Lewis Hamilton with only six races remaining.

Verstappen scored 18 points to boost his tally to 262.5 points. He is now six points ahead of Hamilton after the seven-time Formula One champion settled for a fifth-place finish. Hamilton looked like he was on his way to a famous podium finish after starting 11th on the grid due to a 10-place penalty for taking a new Mercedes engine, but a controversial late pit stop scuppered his plans.

Hamilton made his patented charge on a wet Intercity Istanbul Park race track, moving up to third place late on after his nearest rivals Charles LeClerc and Sergio Perez made their respective pit stops. Hamilton managed to nurse his tires and planned to go the entire race without making a pit stop to protect his track position.

Hamilton refused his team’s orders to come in for a pit stop at lap 42 for a new set of intermediates with a podium finish in sight. Mercedes asked Hamilton to make the pit stop at Lap 50 again, with the Briton obeying team orders this time around. He immediately raged at that decision upon learning that he dropped two places from third to fifth after the pit stop.

It could have been much worse for Hamilton as he nearly lost another place on the grid to the hard-charging Pierre Gasly after the pit stop. However, he managed to keep Gasly at bay, limiting the damage to Verstappen, who gained some ground in the title race.

Bottas limits damage for Mercedes with win in Turkey

Hamilton was not pleased with Verstappen’s growing championship lead, muttering, “We shouldn’t have come in. Massive graining man. I told you!! F*** man, why did you give up that space?,” on the team radio. When asked about his tyres after the race, Hamilton said he felt he could have gone all the way without a pit stop and that finishing third was a possibility.

That decision might end up being the deciding factor in the title race as it turned what was supposed to be just a one-point deficit for Hamilton ahead of the race in Austin into a six-point advantage for Verstappen instead.

Fortunately for Hamilton and Mercedes, Valtteri Bottas denied Verstappen maximum points with his win on Sunday. Bottas took full advantage of his pole position to grab his first win of the 2021 F1 season, ending his year-long title drought. Bottas sealed the win by overtaking Leclerc 11 laps from the end to give the Finn his 10th career Formula One victory.

Arsenal to move for Napoli midfielder?