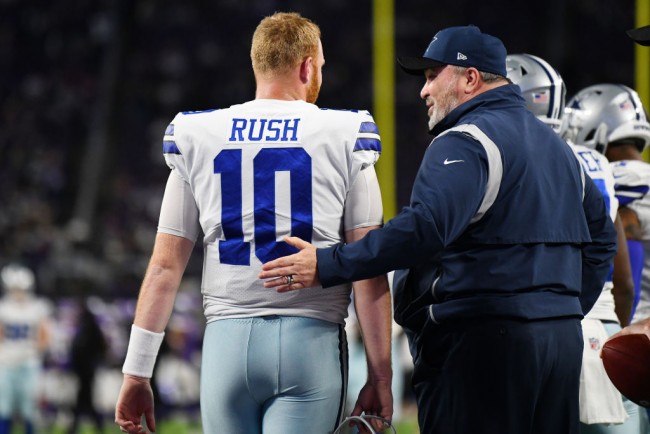 MINNEAPOLIS, MINNESOTA – Cooper Rush of the Dallas Cowboys talks with head coach Mike McCarthy prior to the game against the Minnesota Vikings at U.S. Bank Stadium on October 31, 2021 in Minneapolis, Minnesota. (Photo : Stephen Maturen/Getty Images)

Dallas’ hot streak continued in Week 8 with a thrilling four-point win over the Minnesota Vikings on Sunday Night Football. The Cowboys will look to make it seven wins in a row when they face the Denver Broncos, who are coming off a nerve-wracking win over the Washington Football Team. Check our preview to see who has the edge in this Broncos vs Cowboys showdown.

The Denver Broncos finally snapped their four-game losing skid on Sunday with a 17-10 victory over the Washington Football Team. It was an important win for the Broncos, who returned to .500 for the season with their 4-4 record. They now trail leaders Las Vegas Raiders by 1.5 games in the AFC West heading into Week 9.

For the Broncos to make it two consecutive wins against the Cowboys, they will need to continue their excellent play on the defensive end. The Broncos held Washington to just 10 points as they blocked two field goals. They put the clamps on Taylor Heinicke, who threw a couple of interceptions.

“This is a special place. I love and appreciate you guys for all of my amazing years that I’ve had.”

A raw & heartfelt message from @VonMiller thanking everyone as he reflects on his career in Denver:#ThankYou58 pic.twitter.com/At0VfZeucT

However, Denver will head to Dallas without one of its defensive stalwarts after the Broncos traded star linebacker, Von Miller, to the Los Angeles Rams. Miller is a huge loss for the Broncos as he is the league’s active sack leader with 110.5. The Broncos will miss his pass-rush prowess, with Miller already having 4.5 sacks in their first seven games this season.

Dallas extended its winning streak to six games with an impressive 20-16 victory over the Minnesota Vikings in Week 8. It was an incredible come-from-behind win for the Cowboys, who maintained their 3 1/2 game lead atop the NFC East standings.

Cooper Rush stepped up big time without starting quarterback Dak Prescott, completing 24 of 40 passes for 325 yards with two touchdowns and one interception. He connected with Amari Cooper on the game-winning play, throwing a five-yard touchdown pass to the star wide receiver with 51 seconds remaining on the game clock.

It was a remarkable performance by Rush, considering this was his first career NFL start. He looked like a seasoned veteran in the fourth quarter, engineering an eight-play, 75-yard touchdown drive in the closing stages to seal the win for Dallas.

Rush may be called upon again in Week 9, with Prescott still limited during Wednesday’s practice. However, owner Jerry Jones and coach Mike McCarthy are adamant that Prescott will be back in time for their game against the Cowboys. This season, he has been a vital cog for the Cowboys, completing 73.1 percent of his passes for 1,813 yards with 16 touchdowns and just four interceptions.

What to Become a Localization and Mapping Engineer?