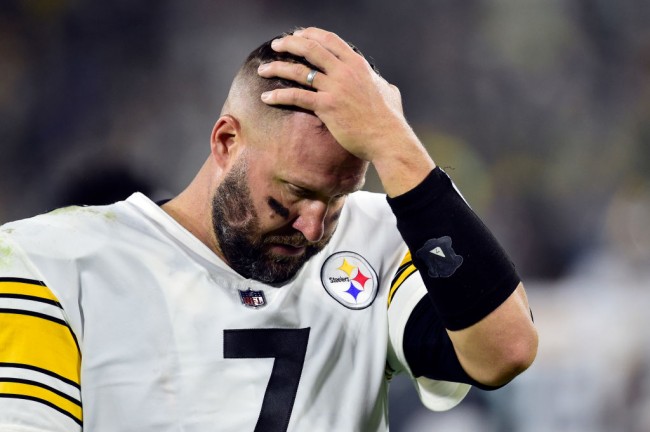 GREEN BAY, WISCONSIN – Ben Roethlisberger of the Pittsburgh Steelers walks off the field after losing to the Green Bay Packers 27-17 at the Lambeau Field on October 03, 2021 in Green Bay, Wisconsin. (Photo : Patrick McDermott/Getty Images)

A blockbuster showdown will be heading our way this coming Sunday as the Denver Broncos and the Pittsburgh Steelers square off in a critical Week 5 clash. Both teams are coming off gut-wrenching losses, so victory is paramount in this matchup. Here’s an in-depth preview of this Broncos vs Steelers showdown.

The Denver Broncos are no longer undefeated. On Sunday, the Broncos picked up their first defeat of the season in embarrassing fashion, losing 23-7 to the Baltimore Ravens. They had no answer for Lamar Jackson, who threw for at least 300 yards for just the second time in his NFL career.

They will look to get their season back on track when they take on the Pittsburgh Steelers this coming Sunday. For the Broncos to record the much-needed win, they will need to execute much better on the offensive end. Teddy Bridgewater struggled mightily against the Ravens, completing just 7 of 16 passes for 65 yards and a touchdown before leaving the game with a concussion.

Neither were a penalty 🤔😢 pic.twitter.com/fYnmXg8BSO

His status for the Week 5 game remains uncertain, with Bridgewater still in the NFL’s concussion protocol. Head coach Vic Fangio was unsure of when his starting quarterback will return, but he did not rule out the possibility of Bridgewater starting against Pittsburgh without the luxury of practice.

If Bridgewater cannot recover in time for that showdown, Drew Lock will get the start against the Steelers. He completed 12 of 21 passes for 113 yards with no touchdowns and one interception in the loss to the Ravens.

The losses keep on coming for the woeful Steelers. Pittsburgh stumbled to its third consecutive defeat on Sunday, absorbing a 27-17 loss to the Green Bay Packers. It was a disappointing result for the Steelers, who led 7-0 at one stage.

2021 has not been kind to Ben Roethlisberger, who has thrown for 1,033 yards with four touchdowns and four interceptions in his 18th season as a Steeler. To make matters worse for Big Ben, he picked up another injury in the loss to the Packers.

The two-time Super Bowl champion suffered a hip injury in Week 4, to add to the pec issue he had been dealing with to start the season. The hip issue bothered Roethlisberger in the game against the Packers, with the 39-year-old quarterback missing a handful of throws to open receivers, including two passes to JuJu Smith-Schuster.

Roethlisberger was looking for Harris in the flat the whole way. And everyone in a green jersey knew it.

He had a clean pocket. He had Pat Freiermuth running open up the seem. And never even looked.

His play and decision making is just inexcusable. #Steelers pic.twitter.com/3YfTeILS9M

Mike Tomlin is sticking with Roethlisberger, though, telling reporters on Monday that Big Ben is the right quarterback for their offense. Roethlisberger’s QBR is fifth-worst in the NFL, with his low 36.3 rating leading only rookies Davis Mills, Justin Fields, Trevor Lawrence, and Zach Wilson.

Gabriel Martinelli getting frustrated at Arsenal?