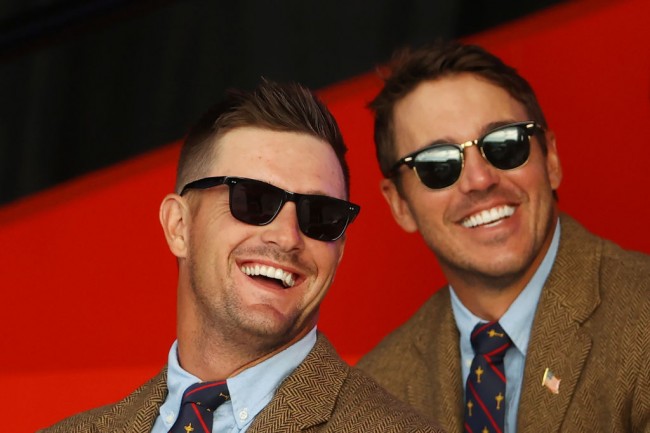 It’s the golf showdown we have all been waiting for as the Brooks vs Bryson matchup is finally on. Brooks Koepka and Bryson DeChambeau will finally settle their differences on the golf course, with the two arch-rivals set to square off in the fifth edition of The Match.

Wynn Golf Club in Las Vegas will host this heavyweight clash with DeChambeau and Koepka set to play a 12-hole match a day after Thanksgiving.

The Match goes 1-on-1 again with Brooks vs Bryson

The November 26 showdown between the two American golf stars will be the first one-on-one matchup since the original edition of The Match in 2018. That contest featured major champions Tiger Woods and Phil Mickelson, with Lefty emerging victorious in that event.

Mickelson has played in the first four editions of The Match. Lefty will not see action in The Match V, but he is still expected to be involved in the event in some shape or form. With Turner Sports presenting this golf extravaganza, fans can expect popular broadcasters Ernie Johnson and Charles Barkley to be on call for this much-hyped showdown.

Koepka and DeChambeau took to social media to promote their upcoming showdown. Koepka tweeted, “So does this mean we’re having Friendsgiving,” while DeChambeau said, “Finally what the world has been waiting to see.”

Koepka and DeChambeau’s showdown two years in the making

The animosity between the two stars had captivated golf fans everywhere, with their feud starting way back in 2019 when Koepka made an issue regarding DeChambeau’s slow play on the golf course.

Their hatred for each other reached a fever pitch after the PGA Championship when Koepka showed his disgust for DeChambeau as the latter walked behind him during an interview. Spectators also got in on the action, with fans taunting DeChambeau with chants of “Brooksy” at various golf events.

Captain Steve Stricker demanded a cease-fire between the two golfers ahead of the United States Ryder Cup showdown with Europe at Whistling Straits. DeChambeau and Koepka did not practice or play together during that tournament, but they played integral roles in the Americans’ record-breaking 19-9 win over the Europeans.

The joy of victory eased the tension between the two, with Koepka and DeChambeau hugging each other twice after Team USA’s victory. DeChambeau was even seen wearing a “Step Brothers” themed shirt with him and Koepka on it at their Ryder Cup victory party.

Are they now friends or still enemies? We will all find out next month when they lock horns in the made-for-TV clash. The one certain thing is that we’ll be getting some quality golf as they are two of the best golfers on the planet today.

DeChambeau has won eight times on the PGA Tour, including a maiden major victory at the 2020 U.S. Open. Koepka is an eight-time winner on the PGA Tour as well, with a total of four major championships in his trophy cabinet.

Top 10 Easy Programming Languages for Kids and Teens to Learn

How to Automate Your Marketing With Social Media Monitoring Tools