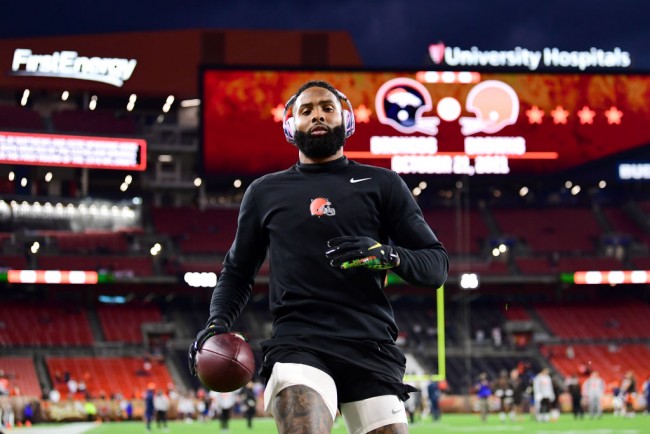 CLEVELAND, OHIO – Wide receiver Odell Beckham Jr. of the Cleveland Browns warms up before the start of the Browns and Denver Broncos game at FirstEnergy Stadium on October 21, 2021 in Cleveland, Ohio. (Photo : Emilee Chinn/Getty Images)

Two AFC North teams will square off on Sunday in Week 9 as the reeling Cleveland Browns visit the Cincinnati Bengals at the Paul Brown Stadium. The Browns have fared extremely well against the Bengals of late, winning five of their last six meetings. Can Baker Mayfield extend Cleveland’s dominance against Cincinnati in this Browns vs Bengals clash?

Trouble is already brewing inside the Browns camp after Cleveland picked up its fourth loss of the season against Pittsburgh in Week 8. On Thursday, Odell Beckham Jr. did not attend the practice for a second consecutive day after his father grabbed the headlines with his intriguing Instagram post.

Beckham Sr. showed highlights of Baker Mayfield not throwing the ball to his son or missing him when he was open. Beckham appears to have played his final game for Cleveland with coach Kevin Stefanski telling his team before Wednesday’s practice that the star wide receiver would no longer be a Brown.

Beckham caught only one pass for six yards in the Browns’ 15-10 loss to the Pittsburgh Steelers. He is ranked 151st in the NFL in receptions per target this season and just 139th in receptions per route run. Contributing to Beckham’s woes is the poor play of Mayfield. The Browns quarterback ranks 27th in QBR with a low 42.2 mark. Mayfield also has just six touchdown passes this season.

Beckham and Mayfield suffered shoulder injuries this season, and they have struggled with their connection as a result. They rank 59th in completion percentage (55%) this season and 60th in off-target percentage (27%).

On Sunday, the Cincinnati Bengals came crashing back to earth with a stunning 34-31 loss to the New York Jets. It was a disappointing loss for the Bengals, who led 31-20 in the final quarter before allowing the Jets to score the game’s final 14 points.

The Bengals, who entered the game as -10.5 favorites, squandered a huge opportunity to solidify their hold of the top spot in the AFC. The Bengals dropped to 5-3 with the loss to New York as they now trail the Baltimore Ravens by a half-game in the AFC North standings.

One guy who needs to step up for Cincinnati in the game against Cleveland is Joe Burrow. He completed 21 of 34 passes for 259 yards with three touchdowns and one costly interception in the loss to the Jets. The Bengals have benefited from Burrow’s outstanding play of late, scoring at least 30 points in each of their last three games.

However, the Bengals will have their work cut out for them in Week 9 as they will face a Browns team that is third in the NFL in total defense, allowing just 304.9 yards per game this season.