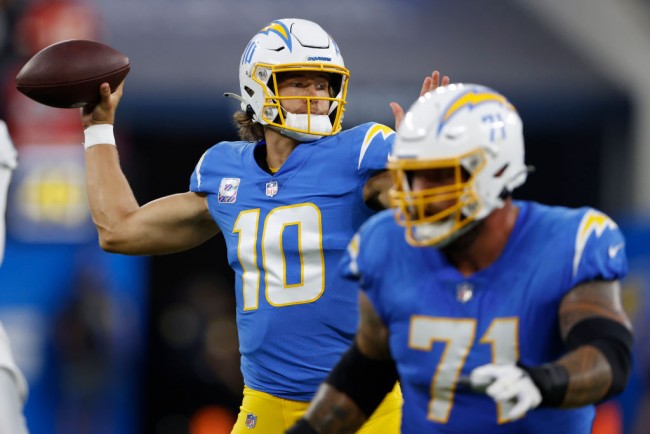 INGLEWOOD, CALIFORNIA – Quarterback Justin Herbert (#10) of the Los Angeles Chargers passes against the Las Vegas Raiders during the first half at the SoFi Stadium on October 4, 2021 in Inglewood, California. (Photo : Sean M. Haffey/Getty Images)

This coming Sunday, two of the league’s best young quarterbacks lock horns as Justin Herbert and Baker Mayfield square off in the Browns vs Chargers Week 5 game. Which AFC team will emerge with a 4-1 record in this matchup? Read our preview to see who has the edge in this clash.

Kevin Stefanski made a triumphant return to Minnesota, leading the Cleveland Browns to a 14-7 victory over the Vikings on Sunday. This is the first time since the 1993-95 seasons that the Browns have started 3-1 in back-to-back campaigns.

The Browns leaned on their defense and ground game to grind out the ugly victory. Nick Chubb ran 21 times for 100 yards while Kareem Hunt had 14 carries for 69 yards and a score. The Browns finished with 184 yards rushing in total, outgaining the Vikings by 119 yards on the ground.

Kareem Hunt punches it in and the #Browns convert for 2️⃣ to take the lead 🔥pic.twitter.com/Z7xucXO5sF

Cleveland’s defense stood tall for the second week running, stopping Kirk Cousins after his opening drive. After starting 6 for 6 on his first drive, Cousins struggled the rest of the way against a smothering Browns defense, going just 14 of 32 to finish with a paltry 203 passing yards.

The Browns needed their defense and run game to be at their best as Baker Mayfield struggled mightily in Week 4. He completed just 15 of 33 passes for 155 yards with no touchdowns. In that win, he took three sacks and recorded a passer rating of just 59.9, his lowest passer rating since Week 6 last year against Pittsburgh.

There’s just no stopping the Chargers right now. Los Angeles extended its winning streak to two games with an impressive 28-14 victory over the Las Vegas Raiders. It was a critical win for the Chargers, who handed the Raiders their first defeat of the season. They now both share the lead in the AFC West, with the Chargers, Raiders, and the Denver Broncos carrying similar 3-1 records.

Justin Herbert led the way for the Chargers in Week 4, completing 25 of 38 passes for 222 yards with three scores and no interceptions. He did most of his damage in the opening half, completing 20 of 25 passes for 175 yards and three touchdowns through the first two quarters.

Herbert got some help from Austin Ekeler, who rushed for a career-high 117 yards and a touchdown on 15 carries. Ekeler also wreaked havoc through the air, catching three passes for 28 yards and a score. On Monday night, Jared Cook was Herbert’s favorite target, and the tight end duly delivered, making six receptions for 70 yards and a touchdown.

Things are bound to get more challenging in Week 5 as the Chargers will face one of the league’s best defenses in Cleveland. The Browns are second in the NFL in total defense, allowing just 250.3 yards per game this season.