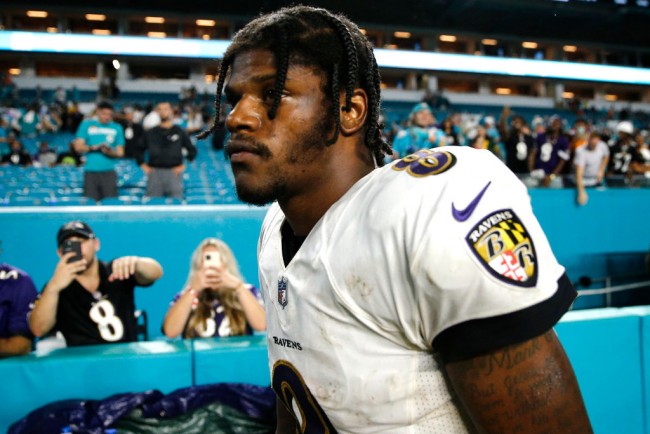 MIAMI GARDENS, FLORIDA – Lamar Jackson #8 of the Baltimore Ravens reacts after losing to the Miami Dolphins 22-10 in the game at Hard Rock Stadium on November 11, 2021 in Miami Gardens, Florida. (Photo : Michael Reaves/Getty Images)

The Baltimore Ravens have won four of their last five games against the Cleveland Browns. The Ravens hope to extend that dominance in Week 12 when they square off with the Browns on Sunday Night Football. Here’s a breakdown of this pivotal AFC North matchup.

The Cleveland Browns looked far from impressive in their win against the Detroit Lions, settling for a 13-10 victory against the worst team in the NFL. The Browns’ offense stalled in the second half, with the Lions outscoring them 10-0 during that period. That made things interesting late in the game, with Cleveland holding on to a precarious three-point advantage.

Fortunately for the Browns, Nick Chubb stepped up in the dying minutes, icing the game with four late runs. Chubb was superb all afternoon long, running for 130 yards on 22 carries. The Browns needed Chubb to be dominant, with Baker Mayfield looking out of sorts against the Lions. He completed just 15 of 29 passes for 176 yards with one touchdown and two interceptions in Week 11.

Browns fans booed Mayfield because of that performance. He recorded an 8.6 QBR in that game, the third-worst outing of his career using that metric. Mayfield dropped to 27th in the league in QBR with that woeful showing. He will look to get his game going against a Ravens secondary that is allowing 369.7 yards per game through the air this season, the eighth-worst in the NFL.

The Baltimore Ravens remained in control of the AFC North after a heart-stopping 16-13 victory over the Chicago Bears in Week 11. Devonta Freeman scored a three-yard rushing touchdown with just 22 seconds remaining in the game to hand the Ravens the come-from-behind win.

Baltimore’s victory would not be possible without the heroics of Tyler Huntley, who started in place of the ailing Lamar Jackson. Huntley made history with Sunday’s performance as he became just the fourth quarterback over the previous 30 NFL seasons to engineer a game-winning drive in the last two minutes of the fourth quarter in his first career league start.

It was a critical win for the Ravens, who gained some ground on the Tennessee Titans for the AFC’s best record. The Titans’ stunning loss to the Texans meant that the Ravens are now just a half-game behind Tennessee for the top spot in the AFC.

Jackson had congestion in his lungs and was ruled out for the contest only hours before the game. However, the Ravens made it clear that Jackson is not suffering from COVID-19 and that they are hopeful that he will be good to go for their crunch showdown with the Cleveland Browns. Jackson has never missed back-to-back games in his NFL career.

How Snowflake is Providing AI Based Solutions to its Customers Hussle-Free?