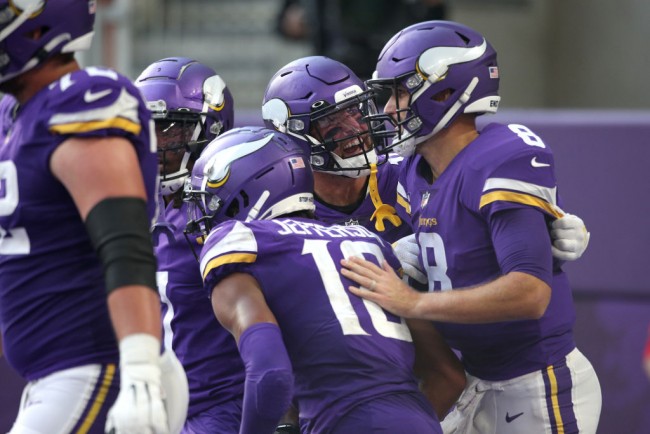 MINNEAPOLIS, MINNESOTA – Adam Thielen (#19) of the Minnesota Vikings celebrates with Kirk Cousins (#8) after throwing a touchdown to Justin Jefferson (#18) during the second quarter in the game against the Seattle Seahawks at the U.S. Bank Stadium on September 26, 2021 in Minneapolis, Minnesota. (Photo : David Berding/Getty Images)

Two of the league’s best quarterbacks square off this coming Sunday as Kirk Cousins and the Minnesota Vikings take on Baker Mayfield and the rest of the Cleveland Browns.

On Sunday, Cleveland extended its winning streak to two games with a dominant 26-6 victory over the Chicago Bears. It was a huge win for the Browns, who improved their record this season to 2-1.

The Browns defense took center stage in Week 3 as they made Justin Fields’ life a living hell in his first start as the Bears quarterback. Cleveland sacked the former Ohio State star nine times, with Fields also getting hit by the Browns 15 times in this contest. He finished the game with just 68 passing yards.

Myles Garrett was the star of the Cleveland defense, making a franchise-record 4 ½ sacks. Such was the dominance of the Browns defense in this game that they held the Bears to just 47 yards of total offense and six first downs.

There was also some great news for the Browns on the offensive side, with Odell Beckham Jr. making his much-anticipated return in Week 3 after almost a year out due to a knee injury. He made some crucial contributions on Sunday, catching five passes for 77 yards in his first game since October 25 of last year.

The Minnesota Vikings finally chalked up their first win of the season with a resounding 30-17 victory over the Seattle Seahawks on Sunday. It was a morale-boosting win for the Vikings, who finally snapped their seven-game losing skid against the Seahawks.

What made the victory more impressive for the Vikings was that they pulled it off without the services of star running back Dalvin Cook, who was sidelined with an ankle injury. In Cook’s absence, Alexander Mattison stepped up big time, racking up 171 total yards in the win against Seattle. He made his presence felt in the second half, rushing for 76 yards on 18 carries.

Kirk Cousins. Three throws as the Vikings get the first win of the season.

*Getting information pre-snap and using it post-snap
*Ripping the dig route
*The late conversion in a big spot pic.twitter.com/NpZ9tjZPqs

They will look to sustain the momentum of that huge victory when they take on the Cleveland Browns in a mouth-watering showdown this coming Sunday. Expected to lead the Vikings in that critical matchup is quarterback Kirk Cousins. He inspired Minnesota’s come-from-behind win against Seattle, throwing three touchdown passes in the opening half. Cousins then led three clock-draining field goal drives in the second half, which resulted in Seattle being shut out.

Cousins, who completed 30 of 38 passes for 323 yards against the Seahawks, has been on fire to start the season. Through three games, Cousins has recorded 918 passing yards and eight touchdowns with no interceptions. However, he will have his work cut out for him against a Browns team that is fifth in the NFL in passing defense, allowing just 181.7 yards per game through the air this season.

Minnesota wins over Cleveland to record its second straight victory.

10 Ways to Keep Your Cryptocurrency Safe from Online Frauds