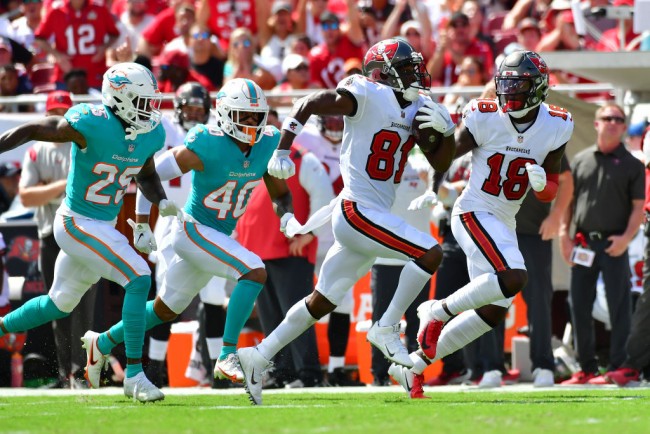 TAMPA, FLORIDA – Antonio Brown (#81) of the Tampa Bay Buccaneers runs to the endzone on a 62-yard touchdown pass from Tom Brady (not pictured) against the Miami Dolphins during the second quarter at the Raymond James Stadium on October 10, 2021 in Tampa, Florida. (Photo : Julio Aguilar/Getty Images)

Tampa Bay’s hot streak continued on Sunday with a monster 28-point win over the Miami Dolphins. The Bucs will look to make it three wins in a row when they visit the Philadelphia Eagles, who are coming off a nerve-wracking win over the Carolina Panthers. Check our preview to see who has the edge in this Bucs vs Eagles TNF showdown.

Tampa Bay grabbed sole possession of the first place in the NFC South standings after a commanding 45-17 win over the Miami Dolphins in Week 5. The Buccaneers improved their regular-season record to 4-1, moving them one game clear of the New Orleans Saints and the Carolina Panthers.

However, there is some concern for the Bucs heading into Week 6, with Brady suffering a thumb injury in his throwing hand in the win against Miami. Brady was seen after the contest with tape on his wrist and thumb. Bruce Arians allayed fans’ concerns, though, saying Brady’s injury happened early in the game and that his monster performance showed the thumb issue did not bother him that much.

Antonio Brown also made history in the Week 5 win, becoming the fastest player in the league to nab 900 receptions. He benefited from Brady’s outstanding play, catching seven passes for 124 yards and a couple of scores. Mike Evans also wreaked havoc for the Bucs, recording 113 receiving yards and two touchdowns.

The Philadelphia Eagles finally snapped their three-game losing skid on Sunday with a heart-stopping 21-18 victory over the Carolina Panthers. Jalen Hurts was the hero for the Eagles, running for two touchdowns in the second half, including the go-ahead score just before the two-minute warning in the fourth quarter that gave Philadelphia the lead for good.

Go ahead and style on ’em, @JalenHurts#PHIvsCAR | #FlyEaglesFly

It was a morale-boosting win for the Eagles, who battled back from a 12-point deficit to record just their second victory of the season. It won’t get any easier for the Eagles in Week 6 as they have only a few days to prepare for their Thursday Night Football showdown against the reigning Super Bowl champions Tampa Bay Buccaneers.

It’s imperative for the Eagles that their defense stands tall in this contest. Philadelphia’s D was outstanding in the Week 5 win, with the Eagles sacking Sam Darnold three times and limiting the Panthers to just 267 total yards. That’s a huge improvement for the Eagles, who had surrendered 83 points and 851 yards in their previous two games.

Stopping the Bucs is a different proposition, however. Tampa Bay generated 558 yards of total offense in the win against Miami, with Brady utilizing all of the Bucs’ weapons at his disposal in that game. His performance on Sunday was only the 14th time in NFL history that a quarterback recorded 400 passing yards, five touchdowns, and no picks in a game.

10 Data Analytics Tools You Can Consider for Application