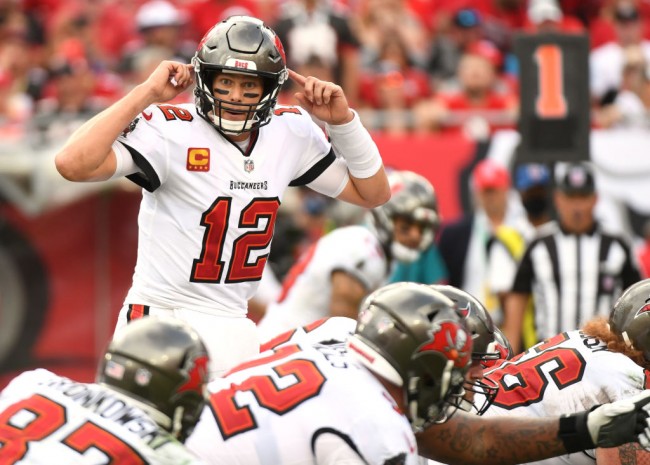 TAMPA, FLORIDA – Quarterback Tom Brady (#12) of the Tampa Bay Buccaneers signals to his receivers prior to the snap in the second quarter of the game against the Atlanta Falcons at the Raymond James Stadium on September 19, 2021 in Tampa, Florida. (Photo : Eric Espada/Getty Images)

The Los Angeles Rams and the Tampa Bay Buccaneers will put their unbeaten records on the line when they lock horns in a mouth-watering showdown at the SoFi Stadium this coming Sunday. Can Tom Brady continue his scorching start in this Bucs vs Rams game?

There is just no stopping Tom Brady and the rest of the Tampa Bay Buccaneers right now. The reigning Super Bowl champions extended their franchise-best winning streak to 10 games with a resounding 48-25 victory over the Atlanta Falcons on Sunday afternoon.

Tom Brady, who improved to a 9-0 lifetime against Atlanta, threw for 276 yards and five touchdowns against the Falcons. The seven-time Super Bowl winner has started the season like a house on fire, recording nine passing touchdowns through Tampa Bay’s first two games.

Tampa Bay’s offense has been simply off the charts in this unbeaten run, with the Buccaneers scoring at least 30 points in each of their last nine outings, a new NFL record. Brady made it all possible in Week 2, throwing two touchdowns each to Rob Gronkowski and Mike Evans and a critical touchdown pass to Chris Godwin in the fourth quarter that ended the Falcons’ uprising.

Things are bound to get more challenging for the Bucs this coming Sunday as they next face the unbeaten Rams in Los Angeles. These two teams met each other in Week 11 last season, with the Rams prevailing 27-24 in a thrilling showdown in Tampa Bay. Brady and co. will have their work cut out against a Rams’ secondary that have surrendered just one passing touchdown this campaign.

The Rams will head home with their unbeaten record intact after escaping Indianapolis with a narrow 27-24 win on Sunday. The Rams blew an 11-point lead in this contest and even trailed 21-17 in the fourth quarter but still managed to pull off the victory thanks to the late-game brilliance of Matthew Stafford.

Stafford now has 30 regular season wins in games where his team trailed in the fourth quarter. He completed 19 of 30 passes for 278 yards and two touchdowns with one interception in his latest comeback win over the Colts. With the game tied at 24, Stafford engineered a drive that resulted in Matt Gay’s match-winning 38-yard field goal with 2:23 remaining.

What makes the Rams confident heading into their Week 3 clash with the Bucs is the burgeoning partnership between Stafford and Cooper Kupp. Their connection remained strong for the second week running, with Kupp catching nine passes for 163 yards and two touchdowns in the win against the Colts.

Stafford and Kupp will fancy their chances against a Tampa Bay secondary which is the Achilles heel of the defending champs this season. The Bucs are second-worst in the league in passing defense this campaign, allowing 684 yards through the air in their first two games against Dallas and Atlanta.

The Rams will hand Brady and the Bucs their first defeat of the season.

Gearing Up For The Upcoming IPL Season