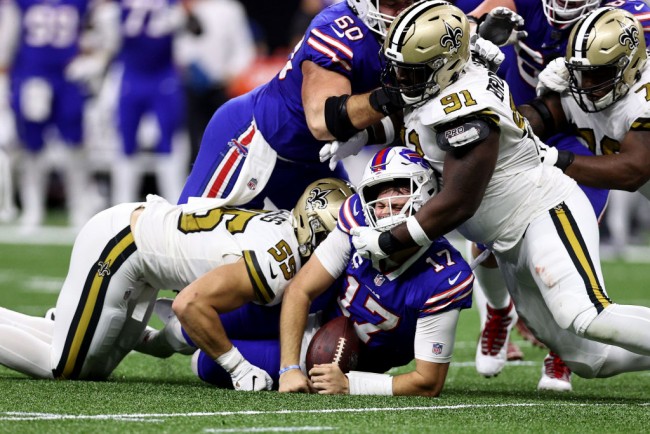 NEW ORLEANS, LOUISIANA – Josh Allen #17 of the Buffalo Bills is sacked by Kaden Elliss #55 of the New Orleans Saints during the second quarter at Caesars Superdome on November 25, 2021 in New Orleans, Louisiana. (Photo : Chris Graythen/Getty Images)

It was a happy Thanksgiving Night for the Buffalo Bills as they demolished the New Orleans Saints in their Week 12 encounter at the Caesars Superdome. The Bills recorded a convincing 31-6 win over the Saints to grab a share of first place with the New England Patriots in the AFC East standings. Buffalo and New England both carry similar 7-4 records.

Josh Allen starred for the Bills in the Week 12 win, completing 23 of 28 passes for 260 yards with four touchdowns and two interceptions. It was a big bounce-back performance by Allen and the rest of the Bills, who suffered a humiliating 41-15 loss to the Indianapolis Colts at home in Week 11.

Dawson Knox was the main beneficiary of Allen’s highly efficient play, catching two touchdown passes. This season, he now has seven touchdowns, setting a new franchise record for touchdowns by a tight end. Knox got the party started with a seven-yard touchdown reception in the first quarter that gave Buffalo a 7-0 lead.

The Bills extended that lead to 24 points after three quarters as they held the Saints scoreless during that stretch. Stefon Diggs also torched the Saints’ secondary, catching seven passes for 74 yards and a score. The Bills dominated the Saints in every facet of the game, outgaining them 361-190 in total yards.

It was another disappointing defeat for the Saints, who have now lost four games in a row following their win against Tampa Bay in Week 8. They have struggled mightily without Jameis Winston, who suffered a knee injury in the win against the Bucs.

Trevor Siemian had difficulty solving the Bills’ defense, throwing for just 163 yards with one touchdown and one interception. The Saints were missing some of their key offensive weapons, with Alvin Kamara and Michael Thomas both sidelined due to various injuries.

The Bills’ victory came at a huge price as star cornerback Tre’Davious White suffered a left knee injury in the second quarter. White picked up the injury when he was covering Saints wide receiver, Marquez Callaway. He walked off the field with a limp and headed straight into the locker room after being examined in the team’s medical tent.

Tre White remains out. Here is a look at his injury. #Bills pic.twitter.com/e3x5ozc4zA

The Bills can ill afford to lose White, who is one of their best defensive players. According to NFL Next Gen Stats, White is allowing a 50.8 completion percentage and a 58.9 passer rating when the All-Pro corner is the nearest defender this season. Those marks are both fourth-best among defensive backs with at least 50 targets this campaign.

Top Cybersecurity Practices to Learn Before Stepping into 2022