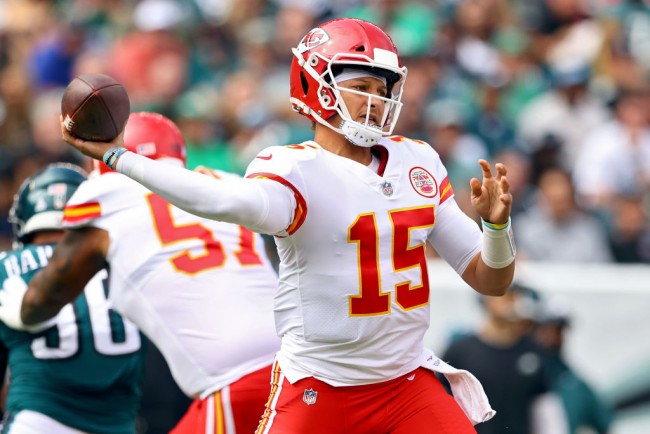 PHILADELPHIA, PENNSYLVANIA – Patrick Mahomes (#15) of the Kansas City Chiefs looks to throw the ball during the first quarter against the Philadelphia Eagles at the Lincoln Financial Field on October 03, 2021 in Philadelphia, Pennsylvania. (Photo : Mitchell Leff/Getty Images)

Patrick Mahomes had himself quite a game on Sunday for the Kansas City Chiefs, throwing five touchdowns in a 12-point win over the Philadelphia Eagles. The Chiefs will look to sustain the momentum of that huge victory this coming Sunday night when they face the Buffalo Bills in a rematch of last season’s AFC Championship. Here’s an in-depth breakdown of this Bills vs Chiefs clash.

The Buffalo Bills will head to their showdown with the Kansas City Chiefs with momentum on their side after trouncing the Houston Texans, 40-0, on Sunday. It was another impressive win by the Bills, who grabbed their third consecutive victory to improve their record to 3-1.

Just like in their previous two victories against the Miami Dolphins and Washington Football Team, Josh Allen stole the show for Buffalo against Houston. He completed 20 of 29 passes for 248 yards with two touchdowns and one interception and ran for 41 yards on six carries. Allen has accounted for nine total touchdowns in the Bills’ last three games.

The Bills’ defense also was superb in the Week 4 win. They made Davis Mills’ life a living hell on Sunday, limiting him to just 88 passing yards and intercepting four of his passes. With the 40-point demolition, the Bills handed the Texans their most lopsided defeat in franchise history.

The Kansas City Chiefs finally snapped their two-game losing streak with a resounding 42-30 win over the Philadelphia Eagles. It was a big bounce-back victory for the Chiefs, who suffered gut-wrenching defeats to the Baltimore Ravens and the Los Angeles Chargers in their previous two outings.

Leading the way for Kansas City in this game was quarterback Patrick Mahomes. He completed 24 of 30 passes for 278 yards with five touchdowns and one interception. Tyreek Hill benefited from Mahomes’ highly efficient play, finishing with 186 receiving yards and three touchdowns.

This combo is unstoppable. #ChiefsKingdom

Kansas City’s ground game was also outstanding in the win against Philadelphia. Clyde Edwards-Helaire eclipsed the 100-yard rushing mark for the second week running, rushing for 102 yards on 14 carries against the Eagles. The Chiefs racked up a total of 200 yards on the ground.

It’s crucial for the Chiefs that Mahomes and Hill step up their play again this coming Sunday against Buffalo. The Chiefs are averaging 297.3 passing yards per game this season. Their vaunted passing attack may become even more lethal in Week 4 with wide receiver Josh Gordon on track to make his debut for the Chiefs against the Bills.