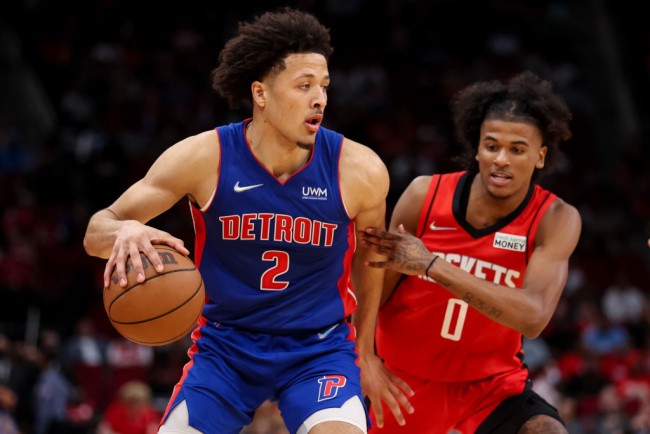 HOUSTON, TEXAS – Cade Cunningham #2 of the Detroit Pistons controls the ball ahead of Jalen Green #0 of the Houston Rockets during the second half at Toyota Center on November 10, 2021 in Houston, Texas. (Photo : Carmen Mandato/Getty Images)

Cade Cunningham and Jalen Green took center stage in the battle of two of the worst teams in the NBA with the Detroit Pistons pulling off a 112-104 victory over the Houston Rockets on Wednesday night. It was the first meeting in the professional ranks between the top two picks in the 2021 NBA Draft and they both did not disappoint in their much-anticipated showdown.

Green lighting it up for Houston Rockets this season

Green has now scored 20 points or more in three of the Rockets’ first 11 games, including a 30-point showing against the Boston Celtics last month. Green is just the third rookie after Trae Young and Ja Morant to record a 30-point outing within his first three games since the 2000-01 season.

Green found his stroke in the third quarter, scoring 12 of his 23 points during that period. He shot 4-of-7 from the floor in that quarter and 2-of-3 from deep. Green also got the crowd on its feet with 3:45 remaining in that quarter when he drove past Cunningham for a two-handed dunk that knotted the score at 73-all.

Green talked some trash to Cunningham after the jam, resulting in a technical foul for the Rockets rookie. Green talked about the incident in a press conference after the game, saying “It happened, it’s basketball. I don’t remember exactly what I said. It was just the intensity of the game. I was getting fired up, just trying to get a dub, that’s all.”

Unfortunately for Green and the Rockets, they did not get the dub in the end as the Pistons took control of proceedings in the final quarter. Houston made things interesting near the end, though, cutting Detroit’s lead to just one point with 2:30 left after a three-pointer by Eric Gordon.

Cunningham heating up after slow start for Detroit Pistons

Cunningham made sure there won’t be a late Detroit collapse, recording two points, two rebounds and one assist down the stretch to preserve the win for the Pistons. Cunningham is heating up after a slow start, notching career highs against Houston in points, field goals made, three-point field goals made and steals.

After missing 20 of his 21 three-point attempts in his first three games, Cunningham has started to connect from deep, knocking down seven of his 15 three-pointers in his last two outings. He shot 4-of-8 from beyond the arc against the Rockets, finishing the game as the Pistons’ second-leading scorer.

Artificial Intelligence Technologies at the Heart of Bosch Products